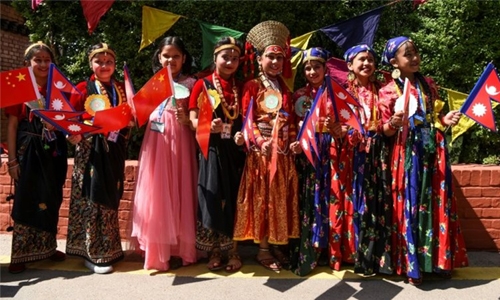 China and Nepal hailed the “beginning of a new era” in relations yesterday as President Xi Jinping ended his visit with promises of a railway and tunnel connecting the two countries. Xi announced 3.5 billion RMB ($493 million) of aid between 2020-2022 “to uplift the living standard of Nepali people” during talks with President Bidhya Devi Bhandari, an official said. Kathmandu has also sought closer ties and much-needed energy and infrastructure investments from Beijing.

In a joint statement the two countries said Xi’s visit “marked the beginning of a new era in Nepal- China relations and served as an important milestone in the history of friendly cooperation”. During the visit Nepali and Chinese officials signed at least 15 agreements, including a feasibility study for a cross-border railway project that would give Beijing access to the south through Nepal’s open border with India.

“We will develop a multi-dimensional trans-Himalayan connectivity network and help Nepal to realise its dream to transform itself from a landlocked country to land-linked country,” Xi said in his address during a banquet on Saturday evening. They also undertook to carry out another feasibility study to construct a tunnel from China’s Kerung to Kathmandu and to repair existing highways, as well as to strengthen hydropower, security, trade and education links.

“The big test of whether or not Xi’s visit will benefit Nepal is if these infrastructure projects will help Nepal become more self-reliant and use access to China to sell our goods, not increase our dependence,” he said. China has intensified its presence in Nepal in recent years, pumping millions of dollars into projects ranging from roads to hydropower plants.

In 2017, Nepal signed up to China’s Belt and Road initiative, a vast global infrastructure programme, which includes the building or upgrading of highways and airports in the country.