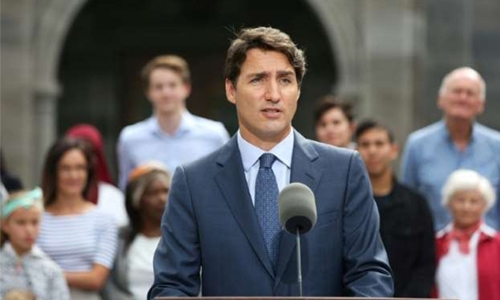 Prime Minister Justin Trudeau yesterday sought to reassure Canada’s allies over security after a senior police intelligence officer was accused of stealing highly classified materials that, if released, could be “potentially devastating.” Cameron Ortis served as the director general of national intelligence coordination for the Royal Canadian Mounted Police (RCMP) before his arrest last Thursday.

The next day he was formally charged with accessing secrets and unauthorized communication of special operational information. Trudeau, campaigning for re-election, told reporters at a small train station in St. John’s, Newfoundland that Canadian officials had reached out to allies about the security breach. “We’re working with them to reassure them, but we want to ensure that everyone understands that we’re taking this situation very seriously,” he said.

A senior police intelligence officer, Ortis was undone by US authorities’ discovery of an internal police document in criminal hands, said Canadian media. The daily Globe and Mail said US authorities discovered in 2018 the RCMP document on the seized laptop of a Vancouver businessman with ties to organized crime, triggering the investigation that led to Ortis. Ortis had reportedly emailed Phantom Secure Communications founder and key administrator Vincent Ramos in 2018, to offer him “valuable” information, said public broadcaster CBC.

Ramos, whose company police estimate made more than $80 million selling encrypted mobile phones to drug traffickers and money launderers between 2008 and 2018, pleaded guilty to racketeering in an American court in May and was sentenced to nine years in prison. The RCMP looked at anyone with access to the internal document, eventually focusing on Ortis.

Ortis “had access to information the Canadian intelligence community possessed,” RCMP Commissioner Brenda Lucki said in a statement Monday. “He also had access to intelligence coming from our allies both domestically and internationally,” she said. “We are aware of the potential risk to agency operations of our partners in Canada and abroad,” the statement said, adding that the investigation is ongoing. Lucki did not specify which foreign organizations may have been exposed to the theft of secrets, which allegedly took place between 2016 and 2019, though Canada is a member of the “Five Eyes” intelligence alliance with Australia, New Zealand, Britain and the United States.

Ortis had access to material that could cause a “high” degree of damage to the country and its allies, if released, with “potentially devastating” consequences, the CBC said, citing a report prepared by Canadian intelligence services. “Analysis of the contents of the reports could reasonably lead a foreign intelligence agency to draw significant conclusions about allied and Canadian intelligence targets, techniques, methods and capabilities,” the report said. “This type of information is among the most highly protected of national security assets, by any government standard and goes to the heart of Canada’s sovereignty and security,” it said.

The Globe and Mail reported Saturday that Ortis’s arrest was linked to a major investigation into the laundering of stolen Russian funds. Ortis, 47, as recently as August was said to be overseeing a probe into whether some of the money was funneled through Canada. According to the newspaper, the corruption investigation was looking at a $230-million fraud scheme allegedly run by senior Russian interior ministry and tax officials. Ortis, who has worked for the RCMP since 2007, faces up to 30 years in prison if convicted of the five charges brought against him under Canada’s criminal code and its Security of Information Act.