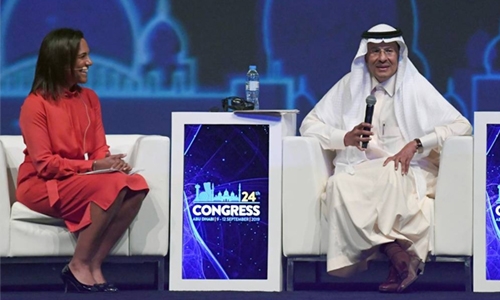 Saudi Arabia’s new energy minister Prince Abdulaziz bin Salman has announced that the Kingdom plans to enrich uranium for its future civilian nuclear power programme. Prince Abdul Aziz told a packed house at the World Energy Congress in Abu Dhabi that the Kingdom was keeping all its options open when it comes to nuclear energy. “We are proceeding with it cautiously. We are experimenting with two nuclear reactors.

We are fortunate enough to have lots of uranium resource and if we scale up we want to go for the full cycle — from producing, enriching and using uranium, even acquiring new technologies….We want to make sure the energy mix is comprehensive,” Prince Abdulaziz said. On domestic energy reform, he said: “I’m not wasting my time discussing a la la land scenario whether Saudi Arabia will be a net importer of energy by 2030. We have made big improvements in consumption at home, with the energy mix, with efficiency and with price reform.

Consumption will be conservatively reduced by 1.5m barrels per day,” he said. With regard to maintaining oil price, Prince Abdulaziz said he wants the Organisation of Petroleum Exporting Countries (OPEC) to strengthen and extend its agreement with non-OPEC producers, including Russia. Previous attempts to limit output had been “successful but temporary in nature…Now it is different in quality, size and perpetuity,” Prince Abdul Aziz said.

The output deal was sealed at an OPEC meeting in Vienna in December 2018. “Soon we will celebrate the anniversary of the charter that will continue to bring us together, and it is until death do us part,” Prince Abdul Aziz said. The minister also hinted that it would desirable to widen OPEC to give non-members a more permanent role. “This industry has to have the institutions that can give the notion of support towards sustainable energy supplies commensurate with what the world economy requires,” he said.

But he said non-OPEC producers — including the biggest, Russia — should be subject to a process he summed up in the motto of President Ronald Regan: “Trust, but verify.” He will meet other producers, including Russian energy minister Alexander Novak, in the UAE later this week.

A rare Gift from the Indian Prime Minister!