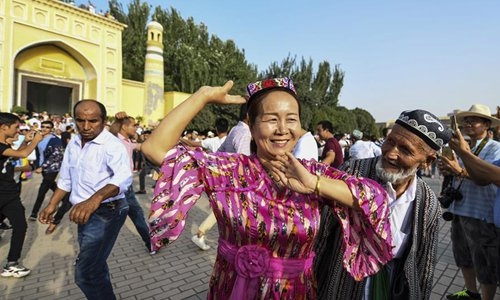 Millions of Muslims celebrates the annual Eid alAdha, known in China as Corban Festival, one of Islam’s most important holidays on Sunday. On Sunday morning, people gathered for Shaman dance on the square in front of the Id Kah Mosque in Kashgar, northwest China’s Xinjiang Uygur Autonomous Region, after morning prayers.

The cheerful music and sounds of rhythmic drums attracted many tourists to join in the celebration. It’s the peak season for the local tourism industry in the summer. The Grand Bazaar in the regional capital Urumqi is packed with visitors who came to select local specialties as souvenirs, while children are attracted by the traditional music instrument called dutar on the street. Mohammadtuersun Wuji runs a decades-old snack bar in the Grand Bazaar. The daily turnover of his shop has exceeded 10,000 yuan (about 1,416 U.S. dollars) recently.

“I used to think that to earn 10,000 yuan was a long way off, but now it happens every single day. I heard that the daily average number of tourists in the Grand Bazaar has reached 100,000. I need to prepare more ingredients, or the supply won’t meet the growing demand,” he said. Many villages in southern Xinjiang also held performances, including traditional folk songs and dances as well as tightrope walking, also known as Dawazi in Xinjiang, for the local residents.

“Thanks to the great performers, I can enjoy the wonderful show at home,” said Aymraguri, a local villager. Railway authorities in the region increased the number of trains to meet public demand during the festival. A total of 157 trains will be added so that transportation will be easier for people of various ethnicities. During Corban Festival, people slay livestock to share with their family or visit relatives and friends to send best wishes. In northwest China’s Ningxia Hui Autonomous Region, home to over 2.5 million Muslims, Ma Chongli, 66, an ethnic Hui, works as a custodian in a mosque in Yinchuan, the regional capital.

He got up at around 4:30 a.m. on Sunday to prepare for the mosque’s prayer ritual. Muslims shook hands and wished each other well during the ritual. After the prayers, some rushed to home to prepare the feast, while others visited markets around the mosque, buying deserts and fruit. Ma also prepared a cow at home. Beef will be a must-have dish and gift when he spends the next three days with his family and friends. “Every festival, we will set up two tables for dinner. Sometimes, about 15 people will come to have dinner with us and each will be served with a bowl of stewed beef.

We will eat and chat at nights. It’s such a great fun,” he said. The festival is also celebrated by Muslims in other northwestern provinces such as Gansu, Qinghai and Shaanxi. China has more than 20 million Muslims living in various regions. “As people’s living standards have been greatly improved in the country, we have enough to eat and more choices during the festival, making the holiday even more colorful and interesting,” Ma said.