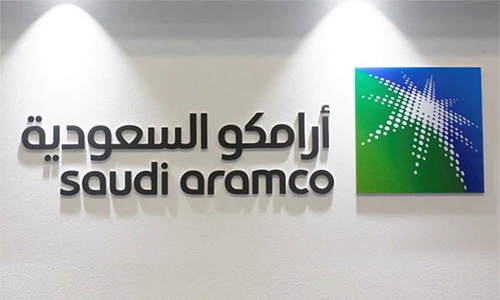 Saudi energy giant Aramco said yesterday its first half net income for 2019 slipped nearly 12 per cent to $46.9 billion, in a first such disclosure. The revenue drop amid lower crude prices was reported as speculation swirled that the company was preparing for its much-delayed overseas stock listing, dubbed potentially the world’s biggest.

The news also coincided with an announcement by India’s Reliance that it had agreed to sell a 20-percent stake in its oil and chemicals business -- worth $15 billion -- to Aramco, a deal that would potentially boost the Saudi giant’s valuation ahead of an IPO. Reporting its revenue, Aramco said in a statement: “The company’s net income was $46.9 billion for the first half (of ) 2019, compared to $53.0 billion for the same period last year.”

The company is slated to hold its first-ever earnings call later on Monday, giving investors a chance to discuss the results with Aramco’s management in another step towards greater transparency. “Despite lower oil prices during the first half of 2019, we continued to deliver solid earnings and strong free cash flow underpinned by our consistent operational performance, cost management and fiscal discipline,” Aramco CEO Amin Nasser was quoted as saying in the statement.

Analysts say record demand for a $12-billion debut international bond launched this year has propelled the world’s top oil exporter to speed up efforts to float the company. But yesterday’s statement made no mention of the planned initial public offering. Crown Prince Mohammed bin Salman has previously said the IPO -- which could potentially be the world’s biggest stock sale -- would take place in late 2020 or early 2021. Saudi Arabia plans to sell up to five percent of the world’s largest energy firm and hopes to raise up to $100 billion based on a $2 trillion valuation of the company.

Failure to reach a $2 trillion valuation as desired by Saudi rulers is widely considered the reason the IPO -- earlier scheduled for 2018 -- has been delayed. The planned IPO forms the cornerstone of a reform programme envisaged by Prince Mohammed to wean the Saudi economy off its reliance on oil. Saudi Arabia has not announced where the listing will be held, but London, New York and Hong Kong have all vied for a slice of the much-touted IPO.