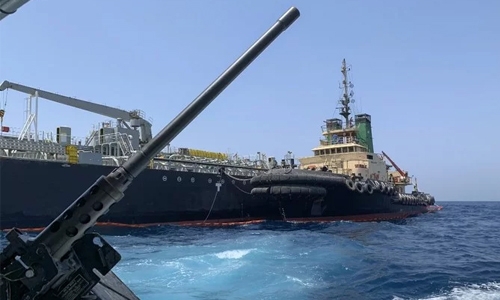 The US said it suspects Iran has seized an oil tanker that drifted into Iranian waters as it traveled through the Strait of Hormuz. Ship tracking data shows the Panamanian-flagged oil tanker Riah, which is based in the UAE, stopped transmitting its location on Saturday.

The incident is the latest involving shipping in the region where tensions between Iran and the US have escalated in recent months. Iran has been accused of planting mines on several tankers as Washington ramps up economic and military pressure on the regime over its nuclear program and aggressive foreign policy in the region. Iran also threatened to retaliate against shipping after British forces this month helped seize an Iranian tanker near Gibraltar as it attempted to deliver oil to Syria.

A US defence official told AP that Riah is in Iranian territorial waters near Qeshm Island, which has a Revolutionary Guard base on it. He said the US “has suspicions” Iran seized the vessel. “Could it have broken down or been towed for assistance? That’s a possibility,” the official said.

“But the longer there is a period of no contact ... it’s going to be a concern.” The Riah, a 58-meter oil tanker, travelled from a port near Dubai through the Strait of Hormuz towards Fujairah on the UAE’s east coast. After 11 p.m. Saturday something happened to the vessel, according to tracking data. Capt Ranjith Raja of the data firm Refinitiv told AP that the tanker had not switched off its tracking in three months of trips around the UAE.

“That is a red flag,” Raja said.  An Emirati official told Al Arabiya that the oil tanker is not owned or operated by the UAE and has not sent a distress call.

New board for Bapco announced