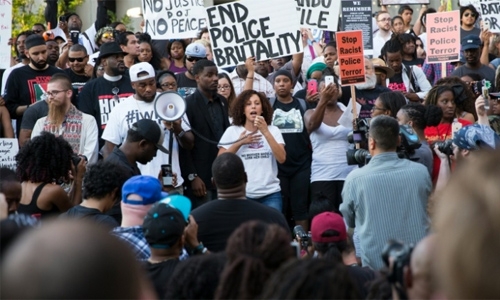 Chicago : The Minnesota police officer who fatally shot 32-year-old African American Philando Castile, in an incident caught in video footage that shocked the nation, was charged Wednesday with second-degree manslaughter.

Officer Jeronimo Yanez was also charged with two felony counts of intentional discharge of a dangerous weapon, for endangering the safety of Castile's girlfriend Diamond Reynolds and her four-year-old daughter. Both were in the car when the officer shot Castile during a traffic stop.

The July 6 shooting was partially captured on video recorded by Reynolds and broadcast on Facebook Live, sparking protests across the United States. In it Castile can be seen bleeding to death in the driver's seat.

His last words, revealed by authorities Wednesday, were "I wasn't reaching for it" -- referring to the gun he had informed the officer that he legally carried with a permit.

"Based upon our thorough and exhaustive review of the facts of this case, it is my conclusion that the use of deadly force by Officer Yanez was not justified, and that sufficient facts exist to prove this to be true," said John Choi, the Ramsey County Attorney whose office is prosecuting the case.

Castile's shooting shocked the nation, coming just a day after a graphic video of another police shooting of an African-American man in Baton Rouge, Louisiana.

Both incidents further exposed the tensions between US police and African Americans, triggering "Black Lives Matter" protests throughout the country.

Humans will NOT survive another 1,000 years on Earth!