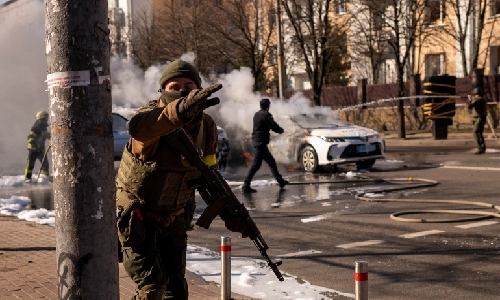 The major Abrahamic religions believe that GOD CREATED the WORLD in SIX days” but in the 21st century now, CAN the Nuclear Power States ‘DESTROY HIS ‘creation in SIX days, if NUKE Weapons are unleashed??.

The major Abrahamic religions believe that GOD CREATED the WORLD in SIX days” but in the 21st century now, CAN the Nuclear Power States ‘DESTROY HIS ‘creation in SIX days, if NUKE Weapons are unleashed??

1. THE WEST to ‘Recognize Crimea Annexation’.

2. US Nuclear forces in Europe to go Home.

3. Ukraine to be free from Nuclear weapons’ leftovers, including technology etc. OR ELSE, Putin’s “Nuclear deterrence forces’” ARE on HIGH ALERT.

Putin probably Underestimated/ Miscalculated as under:

A. FIRST and foremost, President Zelensky proved to be an incredibly courageous, formidable opponent with grit and tenacity.

It is said “PROTOTYPICAL UKRAINIAN is a FIGHTER. Zelensky embodied that ideal; when ASKED to evacuate himself, he responded “I NEED AMMO, NOT A RIDE”.

B. Solidarity and Heroic resistance/resilience of Ukrainian people was unique.

Civilians with physical and moral courage and gallantry are facing the Russian tanks on the cities’ roads; people even came out when the Nuclear power plant is taken over by RUSSIAN TROOPS.

C. Unexpected wide-ranging and wholesale SANCTIONS by US, the WEST, including Japan and Australia on several fronts, especially the U-turn in the policy of Germany and Sweden on ARMS/ Weapon supplies to the outside country and financial support and huge Global backlash/public support in the streets/roads, discounting the protests in Moscow and other Russian cities, where it's considered illegal to protest en masse (thousands of Protesters were rounded up); went beyond the calculations of Putin.

D. Most importantly, removal of big Russian Banks from using the SWIFT system for international payments through the banking sector and freezing of Forex Reserves of the Central Bank of Russia buy EU, UK and US and Japan, was never in Putin’s mind.

E. The unexpected delay in overrunning Ukraine went beyond the time frame advised by his Military Generals.

There could be two reasons for this: Firstly, following the century-old Leninist policy of “TWO STEPS FORWARD, ONE STEP BACKWARD” in a War.

Secondly, Putin sent his Military TEAM B type to begin the assault to be backed up by regular forces LATER.

The WEST should not underestimate Putin and his present State of Mind.

He thinks that the BREAK-UP of the former USSR was a tragedy created by the US and its ALLIES.

HE is now trying to recoup a part of what seems to be his END GAME?

It was partly clear when Ukrainian Representative in UNGA played a video clip of a young Russian Soldier talking to his mother back home and told her that he was in Ukraine and his mother was shocked to learn that as she knew that he was undergoing training locally.

The BOY told her that THEY WERE told that “YOU are the Liberators and would be welcomed in Ukraine by the general public”.

This is the narrative Russian Propaganda machinery in Kremlin is running through STATE-MEDIA (Private media is under censorship hardly watched by locals).

F. Russian Oligarchs are also under Sanctions by the US, UK, EU other countries.

Though it may not make Putin change his mind it will certainly impact the Russian economy in the long run and who knows the NEXUS between Putin and OLIGARCHS?

G - Stand of Turkey: Turkey has now warned the nations to comply with the MONTREUX Convention of 1936 under which WARSHIPS cannot enter the Straits of Bosphorus and Dardanelles under Turkey without their approval.

BUT, again Putin has kept President Erdogan in dark as 6 warships and one Submarine are already in the Black sea since the Sea Drill time with Belarus started and extended.

These warships are now helping the Russian Army to attack Ukraine from the South effectively.

So nothing can change it now against Russia.

WAS Turkey caught unaware? Turkey is refusing to put any sanctions under the pretext of fragile financial position and good relations with both countries.

H. The Chinese Stand: PRC is very watchful and supportive of Russia.

Why? Firstly, its position in Hong Kong and TAIWAN is precarious under WESTERN EYES.

Thirdly, PRC itself does not practice Fair human rights.

It has scant respect on such issues.

A BIGGER Russia would be an added advantage to PRC visvis USA.

For PRC an INVASION has a different meaning suitable to its GEO-POLITICAL compulsions in South-East Asia after QUAD is formed between the US, Japan, India and Australia.

I. UNGA’s Special Session to ‘Demand immediate withdrawal of Russia from Ukraine ‘was held during last two days and the Resolution was passed last night: as 141 nations voted in favour of the motion while 35 countries abstained (notably China, India and Pakistan) and only 5 voted against the motion.

Though such RESOLUTION is non-binding on Russia, it shows that the overwhelming majority, almost 80% of nations deplored the Russian invasion of Ukraine.

From the Middle East, only KUWAIT made LOUD denunciation of Moscow.

II. If Ukraine falls, WHO IS NEXT? SINCE Putin got frustrated and furious due to the unforeseen delays in his Perceived INVASION as a‘ CAKEWALK ‘ in overrunning Ukraine.

AND when it got locked in with huge sanctions by the US AND THE WEST, his mindset went Nuclear.

A. for Kremlin (Financial impact)

2. Central Bank of Russia has kept the key INTEREST RATE at 20%.

50% of FOREX reserves are frozen.

It will make life costly for all the Russians with hyperinflation.

And disinvest, leave partnerships with Russian Companies or stop new investment in Russia or elsewhere with Russian companies.

4. Oil is on the boil at 113 USD a Barrel but the Oil Traders shun purchases from Russia.

Other big Russian banks were expelled from SWIFT.

6. Russian share market is closed for the last 3 days.

8. US, UK have closed air space for Russian Aeroplanes.

Russia is on the road to HUGE LIQUIDITY SQUEEZE.

The above ones are only indicative after-effects, otherwise, the list is exhaustive.

1. Russia has lost in International Games, Sports and Athletics events.

It is barred to play in FIFA 2022 IN QATAR. Even in the entertainment field, Russin Films face NO SHOW.

2. Chelsea FC owned by Russian Billionaire, Abramovich, is on SALE.

3. Google blocked MAP services in Russia, making it difficult for Russians to locate cities and other places

5. Big Social Media players are blocking their APPS.5. Putin himself is stripped off BLACK BELT TITLE.

As per PM, Boris Johnson and President V, Zelensky, Russia have already moved on the brutal ways to WAR CRIMES.

President Zelensky has complained to ICC and a prime facie case is under probe.

Reportedly, Russian forces have used banned CLUSTER munitions and also VACUUM BOMBS, which OXYGEN from the area and raises the temperature.

Are we moving towards a bi-polar WORLD again with deadly COLD-WAR? Is Ukraine going to survive the war?

Will Russia will get what Stalin got in 1939 when he invaded Finland.

(Finland lost a part of its Territory but survived as an Independent Nation.

Will Ukraine will meet the same fate? OR Will Russia have “ BREZHNEV MOMENTS” of 1979 Afghan WAR?