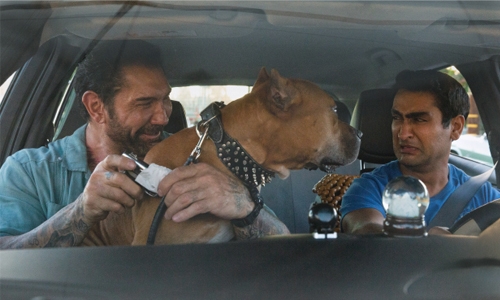 Stuber is a 2019 American action comedy film directed by Michael Dowse and written by Tripper Clancy. It stars Kumail Nanjiani, Dave Bautista, Iko Uwais, Natalie Morales, Betty Gilpin, Jimmy Tatro, Mira Sorvino, and Karen Gillan, and follows an Uberdriver who unwillingly becomes part of a police officer’s arrest operation. The film had its world premiere at South by Southwest on March 13, 2019 and is scheduled to be theatrically released in the United States on July 12, 2019.

Produced by 20th Century Fox, it will be distributed by Walt Disney Studios Motion Pictures, making it the first R-rated film to be distributed by Disney since The Fifth Estate (2013). A meager Uber driver named Stu is forced by an aggressive LAPD detective named Vic to drive him around town to catch a notorious drug lord named Oka Teijo. For Vic, it is especially personal, as Teijo murdered Vic’s partner.

Along the way, Stu deals with Vic’s mad behavior while trying to express his feelings to his friend Becca. Stu and Vic confront each other about Stu’s inability to man up while Vic is called out for his toxic masculinity and negligence toward his daughter Nicole. The film received mixed reviews from critics, who praised Nanjiani and Bautista’s chemistry, but criticized the violence and uneven tone. On review aggregator Rotten Tomatoes, the film holds an approval rating of 43% based on 61 reviews, with an average rating of 4.95/10.

The website’s critical consensus reads, “Though it makes a strong case for future collaborations between Kumail Nanjiani and Dave Bautista, Stuberfails to mesh its contrasting genres, settling for an overtly violent, mildly entertaining diversion that’s far from a five-star ride.” On Metacritic, the film has a weighted average score of 38 out of 100, based on 21 critics, indicating “generally unfavorable reviews”.

US launches investigation into France’s tax on tech giants