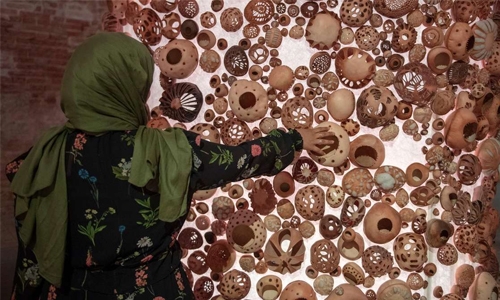 In a darkened room, waves of waxy, cream-coloured material hang from the ceilings. Scattered on the ground and climbing up the material are little brown orbs, made of leather circles stitched together. Some are stuffed with cotton wool while concentric designs are cut out in the tops of others. They resemble small little bread rolls or hollowed out limpets – though the artist behind the work, Zahrah Al Ghamdi, resolutely refers to them as “creatures”.

Al Ghamdi represents Saudi Arabia at its second national pavilion at the Venice Biennale, foregrounding tactility and sensorial responses in her installation. The work, After Illusion, consists of 52,000 leather creatures that Al Ghamdi made in just three months, with two teams working 12 hours a day to dry, boil, bake, stitch, and stuff the objects. (She led one team, and her husband, who took off work to help, led the second shift.)

The experience of ¬production is present: the Venice space is suffused with the smells of cooked leather, while an audio component broadcasts a sound-recording taken from the production process. When visitors tap some of the creatures, sounds play: water dropping, hammers knocking, material being shuffled around.

“I have been working with materiality for a long time,” Al Ghamdi says. “And ¬experimented with different materials, from plastic to textiles, even to dough. When I discovered leather, I began manipulating it and discovered these forms.” Leather is significant in other ways beyond what it offers as a material: Al Ghamdi’s family were shepherds in the mountainous area of Al Bahah in the west of Saudi. “We were in the midst of nature,” she says.

“As shepherds, we used every part of the lamb.” Al Ghamdi, who received a PhD from the University of Coventry in the UK and now teaches at King Abdulaziz University in Jeddah, frequently uses or references natural elements in her work. An earlier, smaller-scale version of this work – without the sound element – appeared in the Athr Gallery show, The Clocks Are Striking Thirteen, under the title Mycelium Running, 2018, in a comparison between the leather orbs and mushrooms. In Inanimate Village, 2017, also shown at Athr, she recreated the layout of her family’s former village with lines of sand and dirt.

Indeed her past has been an enduring presence in her practice: another work relating to her family’s home, which they left for Jeddah, shows the carved wooden doors of their house, tied shut with bright red rope that cascaded to the ground, as if the place itself were weeping.

The show is curated by artist and academic Eiman Elgibreen, who says she was inspired by Al Mu’alla qat, or the Suspended Odes, a well- known group of pre-Islamic Arabic poems. In one of these, by Zuhayr bin Abi Sulma, the poet returns home after 80 years to find he cannot remember what his house looks like. It is only when he surrenders to his misperceptions that, paradoxically, he is able to rediscover the truth of what he sees.

“The home represents identity,” she says. “To us Zahrah was a fitting choice because in the previous years we have seen her using very traditional materials, like sand and rocks, that are linked to her identity of her village. She uses these old materials and gives them new life.” The theme is also deliberately apolitical, Elgibreen notes. The artist and professor, who lives in Riyadh, says she expected the audience to respond politically to the main exhibition’s exploration of the present moment, titled May You Live in Interesting Times.

They deliberately switched tack to focus on sensorial engagement with the work rather than its message. “Being an artist myself, I’ve been eager for so long to see work that is handmade. We lost that human touch. For me, that is a statement we should use in our pavilion,” she explains. “Our contribution to the main concept was how art could perform in times of uncertainty. My contribution to that theme was we need to regain trust,” she says. “We don’t want to hold on to the past or make a future that looks like anyone’ else’s, we just want to use what we have.”