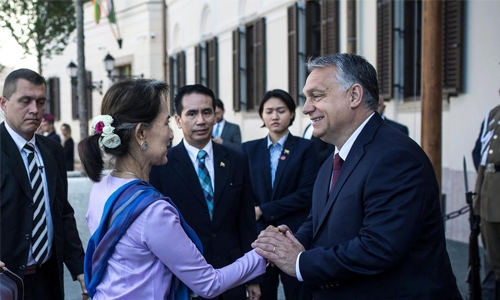 If the decision to award the Nobel Peace Prize to Barack Obama in 2009 was somewhat embarrassing – given that he’d only been US president for a few months and had done little to earn what is considered one of the ultimate accolades – its bestowal on Aung San Suu Kyi in 1991 now looks disastrous. Many thought that Myanmar’s de facto leader – technically she is just “state counsellor”, but the president defers to her – could not sink any lower after a litany of horrors saw her status as a “secular saint” thoroughly demolished.

Last week, however, she managed it. After meeting prime minister Viktor Orban in Budapest, a statement was issued by the Hungarian government: “The two leaders highlighted that one of the greatest challenges at present for both countries and their respective regions – southeast Asia and Europe – is migration. They noted that both regions have seen the emergence of the issue of coexistence with continuously growing Muslim populations.” Mr Orban may be duly and legally elected but it says something about Ms Suu Kyi’s current standing that a woman who was once a human rights icon now seeks an alliance with a far-right populist accused of subverting his country’s democratic institutions, whipping up hatred against non-whites and non-Christians and cracking down on free speech.

Mr Orban has his own (bad) reasons for trading in the language of migrant and Muslim-bashing. Certainly, it is true that Europe is deeply divided over how to deal with the hundreds of thousands of people fleeing war and poverty who want to start new lives on the continent. For Ms Suu Kyi to echo him, however, is truly despicable. The migration “challenge” that is facing Myanmar, after all, is that more than 900,000 mostly Muslim Rohingya were forced out of the country of their birth, in a state-run campaign of harassment and persecution that went on for years, before escalating from October 2016 onwards into what a top UN official has denounced as genocide, crimes against humanity and war crimes.

The Myanmar military that Ms Suu Kyi has always had a soft spot for, not least because her father, general Aung San, used to head it, has tried to solve the “issue of coexistence” with their Muslim compatriots by killing, raping and completely marginalising a community that makes up a mere 4 per cent of the 54 million strong population. Far from “continuously growing”, the percentage of Muslims in the country has gone down. And Myanmar coexisted perfectly well with its Muslim-majority fellow members of the Association of Southeast Asia Nations (Asean), Malaysia and Indonesia, until its ill-treatment of its own Muslims became impossible to ignore.

It is this issue above all that has ruined Ms Suu Kyi’s once lustrous reputation, leading even old friends like South Africa’s Desmond Tutu – a fellow Nobel Prize winner – to condemn a woman he considered “a dearly beloved younger sister” who was a “symbol of righteousness”. At one point apologists urged understanding. Ms Suu Kyi could not speak out, they said, since she had to deal with the political realities of an overwhelmingly Buddhist country in which anti-Muslim sentiment was strong. Further, they pointed out, she could not overrule the military, which is protected and granted considerable powers by the 2008 constitution the gerals themselves drafted.

No one attempts that defence any more and Ms Suu Kyi has nailed her colours to the mast by embracing Mr Orban’s Islamophobic rhetoric. For those who wonder how a woman who was once regularly compared to Mahatma Gandhi and Nelson Mandela could change so shockingly – defending the jailing of journalists, behaving autocratically, refusing to stop slaughter and ethnic cleansing, and now pandering to the basest of prejudices – perhaps the answer is that she was never the person the world thought she was in the first place.

It is not just that she was an accidental politician. Married to an English academic, she spent much of her life abroad; the only reason she was in Myanmar and ended up leading protests against the military dictatorship in 1988 was to take care of her elderly mother. While she immediately became the face of the opposition that finally came to power in 2015, in the country’s first democratic elections for decades, she suffered years of house arrest and separation from her family. As her reputation grew, her political skills did not – a flaw that has long been widely acknowledged.

Far more damaging is the growing suspicion that Ms Suu Kyi’s post-1988 career has not, in fact, been all about democracy and freedom for the people of Myanmar. Instead, say some, it has been driven by a deep sense of entitlement that, as the daughter of the country’s greatest independence hero, it is her destiny to lead Myanmar.

Can this be a new era of pragmatic foreign policy?