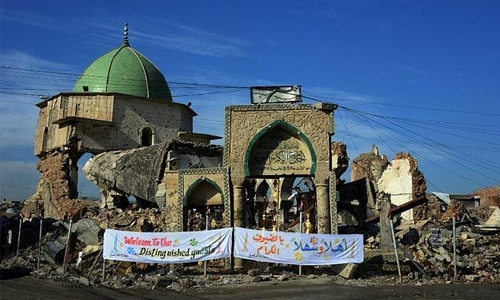 Ashraf Al-Atraqji carefully stepped around tufts of weeds sprouting in a mountain of rubble in Iraq’s Mosul, found a seat on a sun-soaked rock, and struck a pose for the photographer. Behind him stretched the ruins of the Prophet Yunus mosque, an ancient monument infamously destroyed by the Daesh group when it overran Mosul in 2014. A year and a half after Iraqi forces recaptured Mosul from Daesh, residents have been hiring local photographers to capture mementos of their city’s darkest days. Looking out at the metal fences and barbed wire now surrounding what’s left of the mosque, 38-year-old Atraqji said he hoped those days never return.

“Each stone in this place is linked to the history and identity of our city,” said the father of three, his goatee neatly trimmed and wearing stylish sunglasses. “I want to document what the terrorists did so that my children can build a future beyond these ruins.” He wasn’t the only one. A little further up the hill, a couple positioned themselves near a concrete wall marred with graffiti as the sun cast a golden glow. “We want a souvenir, a piece of evidence of the horrors Daesh perpetrated in Mosul,” said the 32-year-old woman, who identified herself as Um Mohammad.

When Daesh swept across parts of Iraq in 2014 it massacred civilians, leaving their remains in dozens of mass graves across the country that the United Nations says could hold up to 12,000 victims. Militants imposed their ultra-conservative interpretation of Islamic law, destroying everything from centuries-old churches to musical instruments. They even raided some 300 photography studios, tearing pictures off the walls. Terrified of being fined or subject to Daesh’s horrifying atrocities, studio owners and photographers fled or hid their equipment.

Many of Mosul’s commercial districts have witnessed a modest revival. Religious leaders laid the first stone to rebuild the iconic Al-Nuri mosque, and Dominican priests are saving 16th-century books and irreplaceable records. Residents and the amateur photographers they’ve hired are doing their own kind of archiving, too, including open-air photo galleries and family portraiture. Mohammad Dhia posed with his two young children in a recently-renovated square in the city’s bustling downtown. Like many of Iraq’s 20 million Internet users — nearly half the population — he hoped to upload his shots to his Facebook profile. “They’re high-quality, beautiful photographs and it’s my way of helping young photographers,” said Dhia, 27.

Clad in white trousers, a patterned burgundy shirt and dark shoes, he hugged his stylishly-dressed children close to him in the crisp Mosul winter. When the session is done, Dhia slid a few bills to the photographer. A single picture costs between 1,000 and 2,000 Iraqi dinars, or less than $2, said photographer Mohammad Bassem. For longer sessions lasting several hours, he charges between $20 and $50. “I do this after my university courses, and it allows me to make a bit to help out my family,” the 24-year-old said.

Despite their cheap rates, these selftaught photographers have to shell out a sizeable sum to buy their equipment. “Our cameras cost between 200 and 600 dollars,” said Bassem. The square in downtown Mosul teemed with amateur portrait photographers carrying flashes, tripods, and reflectors to control light and shadow. They gave directions to their subjects: stand up straight, tilt your chin, look toward the setting sun. One young man posed with a guitar, another with a violin. Some struck a pensive look while perched on a bench; others were lost in thought staring into a pool of water.

Even members of the security forces, dressed head-to-toe in camouflage, struck a pose. Photographers often went the extra mile by retouching the images to eliminate blemishes and brighten eyes. But in a Mosul that remains broadly conservative, not everyone was willing to join in. Noha Ahmed, 25, watched the amateur shoots from afar and said they felt too risky for her. “I’m afraid that my pictures would be used for something and that it would cause me problems,” she said.

‘Age is no obstacle’ - Egyptian swimmer still a champion at 76