Syria’s fuel crisis is hurting civilians, not the regime | THE DAILY TRIBUNE | KINGDOM OF BAHRAIN 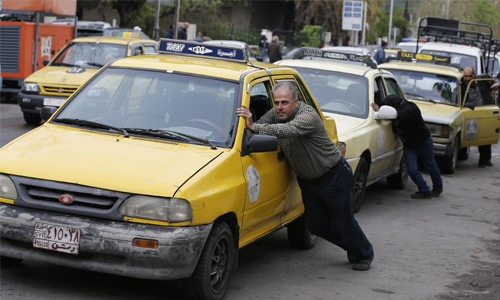 Syria’s fuel crisis is hurting civilians, not the regime

The extent of Syria’s crippling fuel crisis can be seen now on a daily basis, in the seemingly endless queues of cars snarled in traffic as far as the eye can see, inching slowly forwards into petrol stations. This is the latest iteration of a crisis that has lasted through much of a harsh winter, when citizens had to stand in long queues to fill a few containers of diesel that would keep their heaters running for a matter of hours amid regular, extensive power cuts – just one more snapshot of life that symbolises a state no longer able to provide for its citizens.

A fortnight ago, Damascus imposed new limits on the amount of fuel its citizens could access, with each owner of a private car limited to 20 litres of petrol every five days, prompting drivers to queue for hours, only to find petrol stations have run out of fuel by the time they reach the front of the queue. President Bashar Al Assad, who has won the war in Syria militarily due to the unflinching support of his allies in Moscow and Tehran, warned earlier this year that Damascus would now face an economic war waged by its enemies.

The regime blamed the fuel crisis primarily on sanctions imposed by western powers. But last month the pro-government newspaper Al Watan appeared to blame its Iranian ally – which is itself flagging under US sanctions – stating that the situation had worsened since Tehran froze its “credit line” to Syria. The report stated no Iranian oil tankers had arrived in Syria since October 2018. The reason for the disclosure is unclear and Tehran has been coy in responding, but coming a day after foreign minister Mohammad Javad Zarif visited Damascus, it could have been an attempt to plead for Iran to resume its supply.

What is clear is that the Syrian government is lagging behind in producing the number of oil barrels needed and is unlikely to meet demand unless it can reclaim oil and gas fields in the northeast, which are currently under the control of US-backed Kurdish militias. There is a lot to unpack here. While we can only guess at why Tehran has frozen its supply, it has in the past used it to pressure the Assad regime into various economic or political concessions. The US administration’s sanctions, including last month’s full enforcement of sanctions against buyers of Iranian oil, might have something to do with the stalled credit line.

But either way, it shows the vulnerability of a regime that owes its survival to its patrons. The inability of the regime, in turn, to secure alternative supplies is indicative of the extent of the sanctions facing it by western powers. Whether that leverage translates into any meaningful political concessions remains to be seen but it is clear that the sanctions are going to prevent any real reconstruction efforts in Syria from materialising, at least in the short term. So while the rebellion that once raged against Mr Al Assad’s totalitarian dictatorship has largely been snuffed out by sheer force, Syrian civilians are likely to remain in a state of suspended animation and suffering exemplified by the petrol queues.

Which brings us back to those images of queuing drivers that have been going viral over the past few weeks. They have given rise to a robust debate among Syrian social media users, who say the hardship of civilians proves sanctions against Mr Al Assad and his coterie are in reality hurting people rather than the officials who have profited from the war or carried out serious war crimes. That assertion is based on a flawed premise, since the sanctions against the regime have not prevented it from importing oil from Iran in the past.

But there is little doubt that, whether or not sanctions are the right way to pressure the Assad regime or are likely to accomplish anything, they have enshrined further division among long-suffering Syrians. In the past, those divisions were based on the myriad geographic locales within the country and who controlled them. Now these divisions are largely between those inside the country and living under the sanctions, and those who live in exile, fled overseas or have been displaced. These divides are likely to make the path to peacebuilding a much tougher one.

At a conference last month in Brussels, Syrian opposition community organisations publicly thanked the European Union for upholding the sanctions against the Assad regime despite the near-comprehensive defeat of rebels and maintaining one of the few pressure points to exact concessions. On social media, one frequent refrain among regime opponents is that those who chose to remain in Mr Al Assad’s Syria, or chose not to fight to overthrow the dictator, do not deserve sympathy or the collective agonising over the punitive effect of sanctions.

On the one hand, this is understandable from those who lost homes or families to one of Mr Al Assad’s notorious barrel bombs, or those who were forced into displacement or dire circumstances in one of Syria’s neighbouring countries. On the other hand, collective punishment is wrong and there are many reasons why people did not voluntarily seek exile or rebel against the regime. A policy that maintains economic sanctions causing mass suffering but does not have an endgame in sight is ultimately immoral, because it is punitive and vengeful.

But lifting sanctions would appear to be an endorsement of Mr Al Assad’s military solution and herald an acceptance of his legitimacy as a leader, which would also be immoral. Therein lies the dilemma. Nevertheless, the rhetoric that endorses punitive sanctions will make it harder to reconcile and seek common ground once the right alignment of the stars makes the status quo untenable.

Sanctions might be the only leverage western powers have against Mr Al Assad and his acolytes but if they are not careful, it might also create permanent fissures between those who remained in their homeland and exiles, severing the last links between citizens who once shared bread and borders.

Crowded out: Wildlife the biggest loser in real estate war with humans