‘Maverick, be our wingman’: Tom Cruise gets a call from SpaceX astronauts in orbit | THE DAILY TRIBUNE | KINGDOM OF BAHRAIN 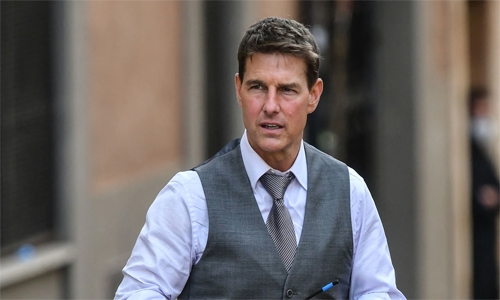 Four space tourists orbiting the Earth in a SpaceX capsule at 17,500 miles per hour (28,162 kph) talked to movie star Tom Cruise on Friday and provided a live update about life aboard the spacecraft.

The first space tourism mission by Elon Musk's SpaceX blasted off from Florida on Wednesday for a three-day voyage that is to end with a splashdown in the Atlantic Ocean at 4:06 pm Pacific time (2306 GMT) on Saturday.

Mission control said the crew members – Jared Isaacman, Sian Proctor, Hayley Arceneaux, and Chris Sembroski – spoke with Cruise, who is hoping to make a film in space, from the vessel on Friday.

"Rook, Nova, Hanks, and Leo spoke to @TomCruise sharing their experience from space," said the Twitter account of Inspiration4, the official name of the first-ever space mission to take place without an actual astronaut.

The names are the call signs of the four passengers aboard SpaceX's Dragon capsule.

“Maverick, you can be our wingman anytime,” the tweet added, accompanied by a video clip of Cruise playing the elite fighter pilot whose call sign was Maverick in the movie “Top Gun.”

However, no details have yet been delivered about the project, which would be done in collaboration with SpaceX.

The four crew members shared their experiences in space during a 10-minute live webcast with mission control on Friday.

Proctor, 51, who teaches geosciences at a college in Arizona and was a finalist to become a NASA astronaut, displayed a picture she drew with metallic markers of the Dragon capsule being propelled into space by a dragon.

"Hayley is a champ at spinning," Proctor said. "She has been spinning from the moment we got in orbit."

"It's a lot of fun and allows us to lift very heavy things without any issue," said Arceneaux.

"We've also been taking several swabs of different parts of our body to evaluate the microbiome and how that changes in these three days in space," she added.

And "we have been spending so much time in this cupola," she observed.

Sembroski, a 42-year-old US Air Force veteran, pulled out his ukelele and played a few chords.

The crew members also opened up the hatch in the nose of the capsule to show off the view from the cupola, a clear glass dome that allows for a 360-degree view outside.

Crew members said they were collecting blood samples for research and doing cognitive tests which will be compared with their results before liftoff.

"We know how fortunate we are to be up here," said billionaire Jared Isaacman, the mission commander.