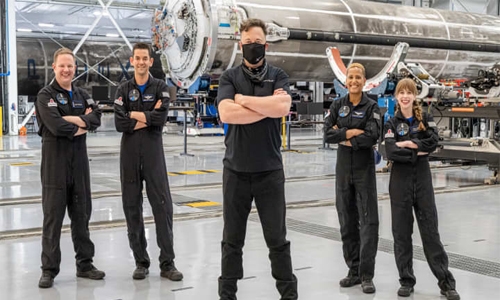 After SpaceX completed a historic, private spaceflight on Saturday, CEO Elon Musk took a pot shot at President Joe Biden who had yet to remark on the company’s and the civilian flight crew’s accomplishments.

One of Musk’s 60 million followers on the social networking platform Twitter asked him, “The President of the United States has refused to even acknowledge the 4 newest American astronauts who helped raise hundreds of millions of dollars for St. Jude. What’s your theory on why that is?”

As CNBC previously reported, SpaceX safely returned its Crew Dragon spacecraft from orbit yesterday. The capsule carried the four members of the Inspiration4 mission back to Earth after three days in space.

One major goal of the Inspiration4 mission was to raise $200 million for St. Jude Children’s Research Hospital. It had raised $160.2 million by Saturday. Celebrating after Inspiration4 splashed down, Musk pledged to contribute $50 million personally — pushing the campaign’s total raised to $210 million.

The White House and SpaceX did not immediately respond to a request for comment.

Top NASA officials have congratulated Musk and SpaceX on the Inspiration4 mission. SpaceX competitors acknowledged it too, with accolades from Boeing, Lockheed Martin, Blue Origin and Musk’s peer and rival Jeff Bezos shared on social media.

This marked the first private SpaceX spaceflight, with a non-professional crew. Additionally, the mission involved the first Black woman to serve as a spacecraft pilot, the youngest American to become an astronaut to date, and the first person to fly in space with a prosthesis.

Although Musk recently stated that he “would prefer to stay out of politics,” his quip on Sunday indicated a willingness to needle the Democratic president and repeat a right-wing taunt about Biden.

More recently, Trump sent Biden sarcastic well-wishes ahead of a summit with Russian President Vladimir Putin in June. He said in an e-mailed statement at the time, “Good luck to Biden in dealing with President Putin— don’t fall asleep during the meeting, and please give him my warmest regards!”

SpaceX generally enjoys a good relationship with the federal government. For example, it won a $2.89 billion contract to build NASA’s next crewed lunar lander, beating out Jeff Bezos’ Blue Origin and Leidos subsidiary Dynetics, and SpaceX has flown 10 astronauts to the ISS for NASA to date.

However, SpaceX is also under investigation by the Department of Justice after accusations that it discriminated against job applicants based on citizenship status — a probe that began during the Trump administration.

In addition to his responsibilities at SpaceX, Musk is concurrently the CEO of electric vehicle makers Tesla. (Tesla is also a supplier to SpaceX.)

In that capacity, he recently bemoaned a Biden administration proposal that would allocate an extra $4,500 in incentives to buyers of certain, new electric light-duty passenger vehicles. One stipulation of the proposal is that electric vehicles should be union-made, domestically.

While the company operates a battery factory in Nevada, and a vehicle assembly plant in California already, with another under construction outside of Austin, Texas, Tesla is the only major U.S. automaker whose production is not unionized here.

Musk said, on Twitter on September 12, of the proposal: “This is written by Ford/UAW lobbyists, as they make their electric car in Mexico. Not obvious how this serves American taxpayers.”