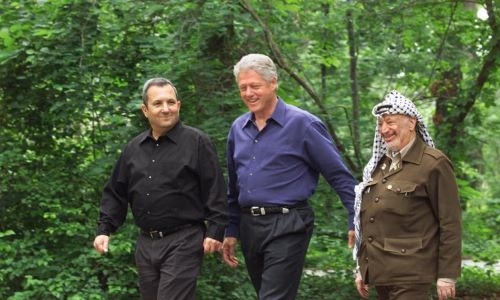 Ready for a documentary about three decades of agonizing fits and starts of the Mideast peace process, from the perspective of U.S. negotiators? You’re probably thinking that doesn’t sound too enticing right about now.

But there’s a reason “The Human Factor,” by Israeli filmmaker Dror Moreh, escapes what would seem a likely fate of being interesting only to policy wonks and those with a direct stake in the issue, and it has something to do with the title. It is a reference to a line from Dennis Ross, the best-known negotiator of the bunch, The Associated Press reports.

The film goes on to prove the point, threading a delicate line between giving us necessary facts and sounding like a dry history lesson. But the value is in the small, and yes, human details -- like the fact that Palestinian leader Yasser Arafat took it upon himself to cut Ross’ chicken for him when they ate together. Or the incongruous sight of Arafat’s entourage watching “The Golden Girls” on TV.

The film is full of such humanizing touches, not just about Arafat but Israeli leaders and American ones, too. Like Bill Clinton, depicted here as a man on a career-defining mission to achieve a peace deal. One small but stunning anecdote: As the Monica Lewinsky scandal is breaking, casting a cloud over Clinton’s presidency, Ross looks over at his boss’ notepad during a crucial meeting. Clinton is writing: “Focus on your job. Focus on your job.”

The film traces the long slog of peace efforts through archival footage and interviews with key negotiators: Ross, who played a huge role for more than a decade, working for presidents from Reagan to Obama; Martin Indyk, twice the U.S. ambassador to Israel; and negotiators Gamal Helal, Aaron David Miller and Daniel Kurtzer.

Through these men, especially Ross, we get a close-up view of world leaders and how they behaved behind closed doors. There’s a fascinating description of a meal in the small dining room off the Oval Office between Clinton, Arafat, Israeli Prime Minister Benjamin Netanyahu and King Hussein of Jordan. Ross describes an offended Hussein admonishing Netanyahu as if he were a wayward schoolboy: “You don’t have the maturity to be a leader,” he tells him, according to Ross. “You have to grow up and become a leader.” There’s silence in the room.

At another point, Ross describes Clinton exclaiming about Netanyahu: “Who does he think the superpower is?”

This is, of course, after the death of Prime Minister Yitzhak Rabin at the hands of a Jewish extremist in 1995, as he pursued peace. The film effectively portrays the grudging respect that had slowly formed between Rabin and Arafat, from a moment when shaking hands was a painful gesture to a time when Arafat would casually drape his arm across Rabin’s back.

For this viewer, the most “human” factor of the film comes with the shock over Rabin’s death, especially from Ross himself. The negotiator recounts that he’d been taking one of his children home from a doctor’s visit when he was paged by Secretary of State Warren Christopher.

Once the news sunk, Ross’ wife had to explain to their children why Dad was crying. “They’d never seen me cry before,” he says. And, speaking to the camera today, the tears return. “It’s obviously still a moment I really can’t talk about,” he says.

Ross would, of course, stay on the job, trying to broker peace between Arafat and Netanyahu, or Arafat and Prime Minister Ehud Barak. Clinton was determined, but that wasn’t enough. The high-stakes 2000 Camp David summit fails to produce an agreement, and we see Clinton in his last days in office in January 2001, in a call with Arafat, who calls him a “great man.”

The film does not, of course, conclusively answer its primary question: What went wrong?

But there’s a hint. It is Miller who raises most directly one of the most serious issues: Was the United States ever really equipped to be an “honest broker”? Was real peace ever possible when the Americans were essential, as Miller puts it in retrospect, acting as Israel’s lawyers?

“I don’t think I am free from prejudgments,” he says. And he asks: “Did we have Palestinian lawyers?”

“The Human Factor,” a Sony Pictures Classics release, has been rated PG-13 by the Motion Picture Association of America “for some violence/bloody images.” Running time: 108 minutes.