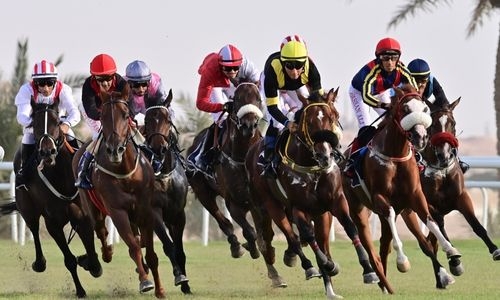 Six races on tomorrow’s eightrace card are offering trophies dedicated to HH Shaikh Khalid, including the feature event which is set to be an eight-furlong imported race offering a whopping BD10,000 in total prize money.

A field of eight will be contesting the event, among whom are Dark Lion for Victorious and Fawzi Nass, trained by Hesham Al Haddad and to be ridden by Stephane Ladjadj.

Byline will also be in the fray for Al Adiyat Racing and AM Smith, to be saddled by Paul Hanagan, as will Beauchamp Bagenal for Ishaq Murad and Hesham Al Haddad, to be ridden by Husain Makki.

Ecosystem will be competing for MKAR Racing and Haider Ebrahim, with Andrea Atzeni in the saddle; while Al Afoo Racing and Al Mohamediya Racing have two contenders apiece. Afoo is represented by Maystar and Panseiro D’Amore, both trained by Mohammed Hasan and to be ridden by Ebrahim Nader and Alberto Sanna, respectively; while Mohamediya will see Prince Elzaam and Shebil Aljazira. Prince Elzaam is trained by Taleb Ali and will be ridden by Liam Keniry, while Shebil Aljazira is trained by Osama Hashim and will be saddled by Neil Callan.

The others include Law of One for Al Afoo Racing, Benmalek for Hasan Mefareh Alajmi, Rua Augusta for Jaffar Marzooq and Covex Kid for Al Mohamediya Racing.

Also on Saturday, the sixth event will be for the Palace Enterprises Cup, while another will be an imported race, two will be for local breeds and the first of the day will be a WAHO race.

India to receive over record $100 billion in remittances in 2022: World Bank