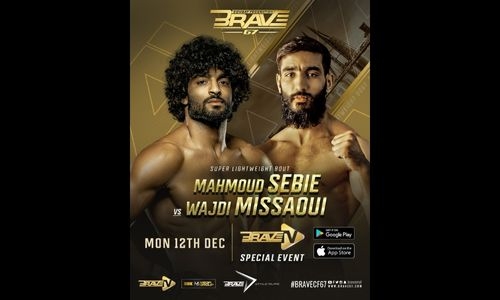 BRAVE Combat Federation’s latest acquisition, Mahmoud Sebie, will make history when he steps into the BRAVE CF 67 cage next month.

Egypt’s world-renowned greco-roman wrestler will become the first Olympian to fight for BRAVE CF when he takes on Tunisia’s Wajdi Missaoui in a Super Lightweight bout for a special BRAVE TV event taking place on December 12th.

Mahmoud is a four-time Arab champion, a five-time African champion, and an Africa Cup gold medallist.

Since his transition to MMA, the 30-year-old ‘Prince of Egypt’ has established himself as someone with a bright future with two wins and two losses in some of the biggest promotions.

His last victory ended via an impressive first-round stoppage due to kicks over countryman Mahdi Boughanmi.

Missaoui is one of Tunisia’s finest MMA exports, with an all-around game.

BRAVE CF 67 will be headlined by Super Lightweight champion Eldar Eldarov, and the unbeaten Denis Maher, who are set to throw down in a Super Welterweight bout.

BRAVE CF 67 will be a closed show featuring the top Arab athletes from around the region.

Five days after the show, the promotion will wrap up the year with a return to Germany on December 17th for BRAVE CF 68, which takes place in association with NFC.