Manama too good for Muharraq | THE DAILY TRIBUNE | KINGDOM OF BAHRAIN 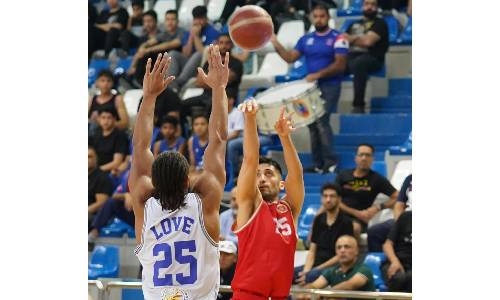 Manama too good for Muharraq

The bitter rivals were engaged in a heated battle but Manama prevailed with just too much firepower as Muharraq struggled to score in the end. Back-to-back three-pointers by Hasan Nowrooz and Elijah Robinson virtually sealed the game for Manama at 79-66 with just over a minute to go.

Muharraq tried valiantly to stay in it but could not match their opponents. Robinson finished with 20 points, including four three-pointers, as Manama’s top scorer, while Nowrooz added 18. Ahmed Hassan Aldurazi chipped in with 14, while Mohammed Ameer had 10 points and 11 rebounds.

For Muharraq, Tony Mitchell scored 23 and had nine rebounds in the losing effort. Bader Abdulla Malabes added 18 while Baqer Isa scored six off the bench. Manama started things off in the contest as the aggressors, ending the first quarter with a comfortable 24-14 advantage. But in the second period, Muharraq were able to close the gap and made it 37-41 heading into the half.

After the break, a Nowrooz triple gave Manama a 60-48 lead late in the third, but Muharraq were able to reduce the gap to seven, 55-62, with the final period remaining. There, Mitchell continued his fine play and had a thunderous slam dunk in transition to bring Muharraq back to within 62-65.

But Manama had all the answers in the end and Muharraq were unable to keep up. Manama thus claimed their seventh win in as many games as one of only two teams that are still undefeated in the league. Al Ahli are the others.

Muharraq dropped to a 4-2 win-loss record. In yesterday’s other game, Al Hala beat Isa Town 100-91. Isa Town got to within six points early in the final quarter but Hala managed to stay in front and eventually close out the nine-point victory.

Tony Farmer top scored for the winners with 33 points while also taking down 12 rebounds and dishing out five assists. Ahmed Khalifa added 21 points while Abdulqader Thani had 17 and Alwatheq Ali 13 to go with 10 boards. Oumar Barry also had 33 points to pace Isa Town in the loss.

Mohamed Nabeel added 22 with 14 rebounds, while Hussain Mahdi had 11 and Jehad Ahmed 10. Hala claimed their third win in seven games with the result, while Isa Town suffered their sixth loss in seven outings as they remained in last place.