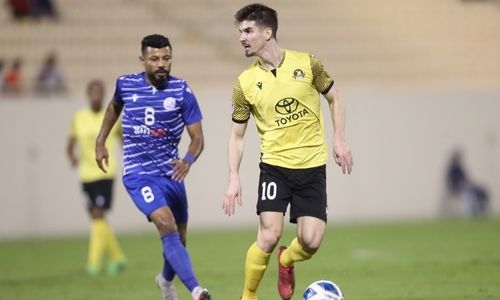 Hidd and Bahrain Club were both victorious last night as action resumed in the 2022/2023 Nasser bin Hamad Bahrain Premier Football League with the fourth week of play.

Hidd were on target twice in the first half as they upset Al Ahli 2-0, while Bahrain Club claimed their first win of the new season following a 2-0 triumph against Budaiya.

League play had been paused for a few weeks prior to yesterday’s games to make away for the international break.

In Hidd’s win, Mohammed Khaled and Abdulrahman Alahmadi were the goalscorers for their side.

Khaled opened their account in the 13th minute after receiving a low cross from the left of the box from Alahmadi.

Khaled then needed only to tap the ball home amidst some traffic for the 1-0 lead.

Then, only six minutes later, it was Alahmadi’s time to strike, and this time the assist was supplied by Mohammed Abdulwahab.

Abdulwahab sent in a floating cross from the edge of the area and Alahmadi used a single touch to guide the ball into the net from the face of goal.

Hidd maintained their advantage the rest of the way as they claimed their second win in four games to improve to six points.

Ahli, who headed into the match in second place on the standings, suffered their second loss but are also on six points.

A defensive blunder by Budaiya on a mistimed headed backpass helped Bahrain Club open their scoring in the first half.

Abdulrahman took advantage of the opportunity and sent the ball home into an empty net.

Then, in the 64th minute, Bahrain Club’s Joel Vinicius Silva Dos Anjos was taken down in the penalty area, earning his side a spot kick.

De Brito stepped up to take the shot, and he made no mistake with his effort, which he sent to the bottom-left corner of goal.

That was enough to secure the win for Bahrain Club, as they improved to four points after four matches.

Budaiya suffered their second loss to go along with two draws, and they stayed on two points on the table.

League action continues tomorrow with another two matches on schedule, both kicking off at 6pm.

Defending champions Riffa are set to take on Sitra, while Muharraq will be playing Al Shabab.

Then, on Sunday, Al Hala face off with Al Khaldiya, and Manama play East Riffa, both with 6.30pm starts.

Manama through to HM the King’s Cup semis