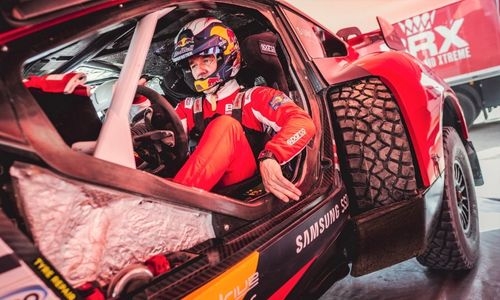 Sebastien Loeb made a solid start to the Rallye Du Maroc today as he set out to extend his lead in the World Rally-Raid Championship with BahraIn Raid Xtreme (BRX).. Loeb recorded the third fastest time on the opening day in his BRX Prodrive Hunter, as Qatar’s Nasser Al Attiyah in a Toyota Hilux set the pace on the 8.67 km prologue, which served as a warm-up for the main action to follow over the next five days. Orlando Terranova, Loeb’s BRX team-mate, finished the stage in fifth place, one spot adrift of French driver Guerlain Chicherit in another Prodrive Hunter.

Loeb started the rally leading Al Attiyah by one point in the race to become the first FIA World Rally Raid champion, with the final round, the Andalucia Rally, to follow in Spain from 18-23 October.

The nine-time World Rally Champion and fellow Frenchman Fabian Lurquin snatched that slender advantage during the Abu Dhabi Desert Challenge back in March, and they know that one small mistake or twist of misfortune could decide the title race.

The prologue was little more than a sprint for the three Prodrive Hunters and the other 80 starters in the cars and trucks category, before the rally begins in earnest tomorrow with the first of five long desert stages, a 316-kms competitive section from Agadir to Tan-Tan. The route covers more sand than in previous years, with bivouacs at Tan-Tan and Laayoune, and stages that are similar to those seen in Saudi Arabia in recent years for the Dakar Rally.

Argentine Terranova, who took his BRX Hunter to a fine fourth place finish in this year’s Dakar back in January, said: “I am happy to be back again rallying. “My personal target is to do a good rally and get quicker as the rally progresses.

This is a big test for the Dakar, as Morocco is a tough rally, but one that I enjoy too.” Chicherit, partnered in the third BRX Hunter by fellow Frenchman Alex Winocq, said: “Rallye du Maroc is very hard for the cars and for the crews. “In short, one kilometre in Morocco counts double or triple in normal conditions. I will do everything I can and if we are in the game, it will give us confidence for the Dakar.”