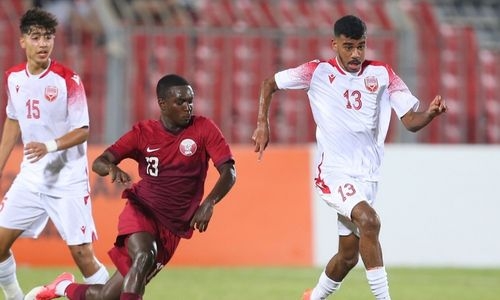 Bahrain came up short in their quest to secure a berth in next year’s AFC U-20 Asian Cup following a disheartening 0-2 loss to Qatar last night in their final Group B match of the qualification process. The game was played at the Shaikh Ali bin Mohammed al Khalifa Stadium at Muharraq Club in Arad.

The loss to their Gulf rivals left the Bahrainis in second place in their division to end their qualifying campaign, but the nationals did not have enough points to stay in contention for a place. Bahrain needed to finish as the group winners to gain an automatic slot or be one of the five best runners-up overall. However, as per the qualifiers’ rules where the match result against the division’s lowest-ranked team would not be counted—in groups with five nations—the nationals did not make the cut.

Bahrain still finished second with seven points, five behind the Qataris who secured the top spot with an undefeated record in four matches for a perfect 12 points. Bangladesh claimed third place after defeating Nepal 3-0 in yesterday’s other game. It was their second win in four matches.

The Nepalis suffered their fourth loss and finished the qualifiers in the Kingdom with a winless record. Bhutan, who were not in action last night, ranked fourth in the division. The Bahrainis gave up both goals in quick succession after the re-start as both teams finished the first 45 minutes goalless.

The visitors opened their account in the 47th minute when Jassem Mohammed Alsharshani fired in a brilliant volley from inside the penalty area off a cross supplied by Mobark Mohammed Alghareeb from the right wing. Alsharshani’s strike was well-hit and it gave Bahrain goalkeeper Mohamed Hasan Jaafar no chance at a stop. The Qataris then made it 2-0 in the 52nd minute when Alhashmi Mohialdin sent the ball home from close range.

A freekick by Ahmed Husham Alrawi hit the Bahrain wall, and the loose ball fell to the feet of Mohialdin, who fired home just a few metres from goal. The Bahrainis could not recover from there as the goals virtually earned the Qataris the win. Awab Elawad Hussain could have added a third for Qatar in the second minute of second-half stoppage time with quick counterattack and nobody but the keeper to beat. But he shot inches wide of the left post, though the miss mattered little in the result.