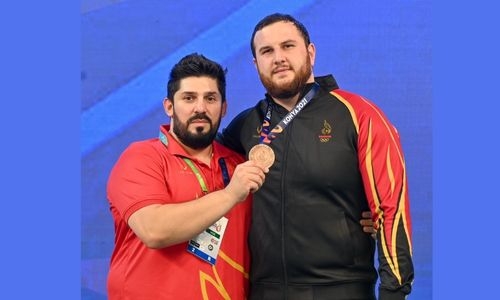 Bahrain added another bronze medal yesterday at the fifth Islamic Solidarity Games in Konya, Turkey. Judoka Azamat Chotchaev claimed the accolade in the men’s over-100kg weight class. His achievement brought Bahrain’s medal tally so far at the Games to 23, including nine gold medals, seven silver and six bronze. It was the second bronze medal won by the Kingdom’s athletes in judo.

Nineteen of the others were claimed in athletics, and one each in cycling and shooting. In yesterday’s judo competition, Azamat missed out on a place in the gold medal match of the men’s over-100kg class after losing his semi-final to Alisher Yusupov of Uzbekistan.

Magomedomar Magamedomarov of the UAE claimed the other final four bout against Ndiaye Mbagnick of Senegal. Magamedomarov went on to capture the gold after defeating Yusupov in the final.

Chotchaev and Mbagnick thus shared third place, each taking home a bronze. There were seven competitors in all in the weight class. The nationals’ campaign in the judo competition at the Islamic Solidarity Games continues today.

Also yesterday, Bahrain wrapped up their participation in shooting but did not win any medals. Bahrain’s 23 medals is the most won by the national team at any edition of the Islamic Solidarity Games. Their previous best was 21. The multi-sport event is scheduled to conclude tomorrow.