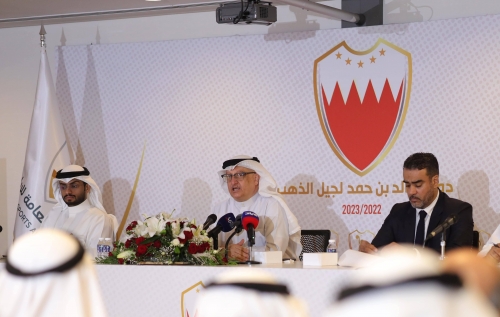 The initiative was launched at a press conference held by the GSA at the Bahrain National Stadium’s Conferences Hall, in the presence of the GSA’s Chief Executive Officer, Dr Abdulrahman Askar, heads of sports federations and representatives of the relevant clubs.

Dr Askar expressed thanks and appreciation to HM the King’s Representative for Humanitarian Work and Youth Affairs, His Highness Shaikh Nasser bin Hamad Al Khalifa, for his constant support for the sports sector, noting that the initiative is within HH’s visions and part of the SCYS’ strategies.

He also paid tribute to HH Shaikh Khalid bin Hamad for his interest in the youth categories sector, citing his directives to launch this initiative which will contribute to honing youngsters’ skills and building a solid base of athletes who are capable of competing at the highest levels in the coming period.

He affirmed HH Shaikh Khalid’s constant directives to provide the necessary support for youth categories in order to build a new generation of athletes who are capable of attaining golden achievements for the Bahraini sport.

The CEO underlined the important role of clubs and federations in ensuring the success of the initiative, noting that the cooperation of everyone will contribute to achieving HH Shaikh’s vision to improve the level of youth categories.

Dr Askar revealed that the youngest category will participate in the first edition of the Khalid bin Hamad Gold Generation League, overseen by the General Sports Authority and organised by the seven sports federations.

Sports include football, basketball, handball, volleyball, table tennis, athletics and cycling. He added that the competitions of the Khalid bin Hamad Gold Generation League will not be held during school hours or exams.

He also revealed that under the initiative, an all-star match or game will be held, with the participation of the best-performing players and the best two coaches, noting that the players will be selected by the relevant technical committees.

Dr Abdulrahman Askar highlighted the importance of the role of various media outlets in ensuring the success of the Khalid bin Hamad Gold Generation League, stressing that extensive media coverage is essential for achieving the goals of the initiative.

Representatives of clubs, sports federations and media outlets expressed their thanks and appreciation to HH Shaikh Khalid bin Hamad for launching the Khalid bin Hamad Gold Generation League, noting that the initiative will contribute to preparing a generation of talented and skilled athletes who will join the national teams and bring about more sports achievements to the kingdom.

Strategic roadmap for development of Bahrain