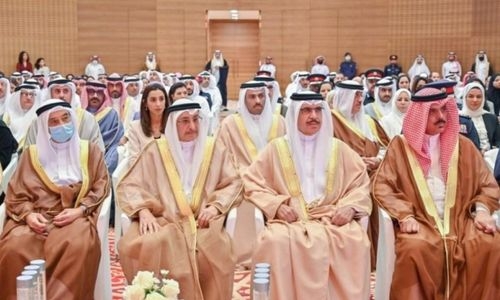 Strategic roadmap for development of Bahrain

Bahrain is committed to sustaining efforts to carry out strategies to promote the public sector’s contribution to comprehensive development. This was emphasised by Deputy Prime Minister and Minister of Infrastructure, Shaikh Khalid bin Abdullah Al Khalifa, while presiding over “the Future Aspirations” workshop yesterday.

“The premises of government work are based on serving the citizen, who is the centerpiece of development and its main goal,” the Deputy Prime Minister said. “In order to explore the best ways to support and empower the citizen, the government will work to follow up on everything new, adapt to every emergency, and determine the priorities of the next stage in a strategic and integrated manner, based on the principles of justice, sustainability and competitiveness set by Bahrain’s Economic Vision 2030 in shaping the features of a bright future.”

The event was the culmination of a series of future aspirations workshops under the directives of His Royal Highness Prince Salman bin Hamad Al Khalifa, Crown Prince and Prime Minister. During the last period, five workshops were held with the participation of 57 ministries and government agencies. They were preceded by five coordination meetings. The workshops reflected the future aspirations and highlighted creative initiatives which showed the capabilities and competencies in the government apparatus

The Deputy Prime Minister stressed continuous efforts to achieve comprehensive growth thanks to the directives of His Majesty King Hamad bin Isa Al Khalifa, which are considered as a roadmap for the government work, and the government’s ongoing efforts, under the leadership of HRH the Crown Prince and Prime Minister, Cabinet Affairs Minister Hamad bin Faisal Al Maliki reviewed the outputs of the workshops which were crystallised in 27 policies and 113 initiatives covering aspirations in five chapters: infrastructure and environment, legislative work, social services, financial and economic work, in addition to government performance and digital transformation.

These will be submitted to the coordination committee chaired by HRH the Crown Prince and Prime Minister for approval. The Deputy Prime Minister said that the directive of HRH Prince Salman to hold the workshops was aimed at determining the mechanisms and priorities that will shape the future aspirations of government work, stem from a belief in the importance of strengthening the principle of participation in decision-making, and direct contribution to determining the optimal orientation.

Shaikh Khalid bin Abdullah praised the efforts of the ministries and government bodies which will contribute to developing the government work. He thanked the heads of the workshops for their contribution to reaching advanced outputs. He also thanked the Ministry of Cabinet Affairs for its efforts to coordinate for the workshops and ensure their good management to attain the desired goal.