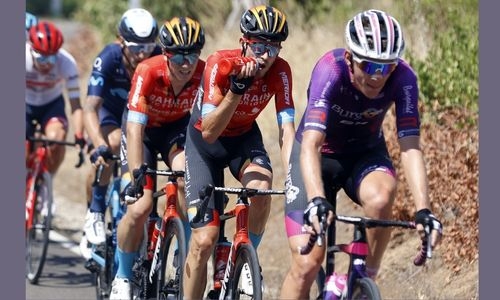 Team Bahrain Victorious rider Santiago Buitrago claimed a top 10 finish on the final general classification (GC) yesterday in the Vuelta a Burgos in Spain. The five-stage event came to a close with a 170.7km ride, which began in the village of Lerma and ended at the Neila Lagoons in the province of Burgos. The event was part of this year’s Union Cycliste International (UCI) Europe Tour. Buitrago claimed eight overall on the GC as the highest-ranked Bahrain Victorious competitor.

The Colombian had an impressive tour, after also placing third on the final points rankings, third amongst the youth and 18th in the King of the Mountain classification. He helped Bahrain Victorious claim third overall on the final Teams’ ranking. He completed the event yesterday in 12th place in stage five, finishing 50 seconds behind winner Joao Almeida of UAE Team Emirates, who took first in four hours six minutes 19 seconds.

Teammate Wout Poels was ranked 11th in the stage. The rest of the Bahrain Victorious riders saw Gino Mader come 25th, Hermann Pernsteiner in 29th, Mikel Landa 32nd, Yukiya Arashiro 86th and Matevz Govekar in 89th. On the final GC, ranked behind Buitrago were Pernsteiner in 20th, Mader in 27th, Landa in 44th, Poels 51st, Arashiro 88th and Govekar 89th. It was an impressive performance for Bahrain Victorious in this year’s Vuelta a Burgos, which included stage wins for Buitrago in the 157km first stage and Govekar in the 169km fourth leg.