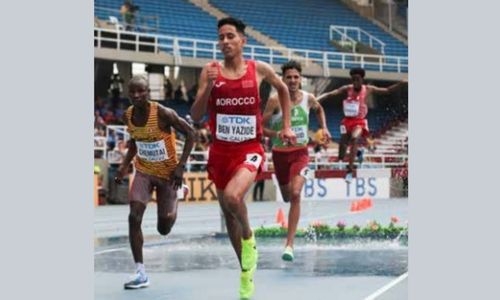 Dhabar to vie for steeplechase gold in junior athletics worlds

Bahrain’s Hamse Dhabar qualified for the medal round of the men’s 3,000 metres steeplechase yesterday at the World Athletics U20 Championships 2022 in Cali, Colombia. The 18-year-old secured an automatic berth in the final after finishing third in the first of three heats yesterday.

To add to his ticket to the next stage, Dhabar posted a new personal best of eight minutes 51.25 seconds in the race. Salaheddine Ben Yazide of Morocco was the heat’s winner in 8:50.70, while Leonard Chemutai of Uganda followed behind him in 8:51.09, marginally beating Dhabar to the finish.

Dhabar’s time was the 10th fastest of the first round. Samuel Duguna of Ethiopia clocked the best mark of 8:44.83 after finishing in first place in heat three.

The men’s steeplechase final is scheduled to be held early on Sunday morning at 1am, Bahrain time. Dhabar will be one of 15 athletes competing for the podium places. Meanwhile, Bahraini athletes are set to be in action on the track today.

At 1am, Bahrain time, Zenab Moussa Ali Mahamat was set to compete in the women’s 400m semi-finals, while at 1.25am, Yusuf Ali Abbas was to run in the men’s 400m semi-finals. Bahrain is one of 145 nations participating in the World Athletics U20 Championships 2022, which features more than 1,500 of the best up-andcoming young athletes from across the globe In the competition’s previous edition in 2018, held in Tampere, Finland, Bahrain’s Winfred Yavi won a bronze medal in the women’s 3,000m steeplechase.

Bahrain in tough loss to Saudi in Gulf basketball