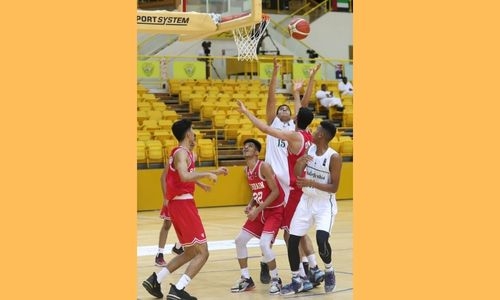 Bahrain in tough loss to Saudi in Gulf basketball

Bahrain lost to Saudi Arabia 63-71 last night in their final preliminary round game of the FIBA Asia U18 Championship-Gulf Basketball Association (GBA) Qualifier, currently being held in Dubai. Despite the defeat, the nationals still advance to the semi-finals, the Bahrain Basketball Association has confirmed.

The Bahrainis completed the six-team opening phase in fourth place, earning them the last berth in the next stage. Bahrain will next take on Qatar in the final four, while Saudi and Kuwait meet in the other match-up.

The Qataris finished the preliminaries as the top seeds, followed by Saudi in second and Kuwait in third. Finishing behind Bahrain were the UAE and Oman, who were both eliminated from further title contention. Today is a rest day ahead of tomorrow’s semis. The gold and bronze medal contests are then scheduled to be held on Saturday. In last night’s clash, the nationals battled back from a 15-point deficit in the first half to make it a close game the rest of the way.

The nationals were down 26-37 heading into the locker rooms, but then rallied in the third quarter to tie it at 43-all on a Nasser Al Anzoor jumper. They then took the lead with an Abbas Albasri basket, and managed to remain marginally ahead at 47-46 heading into the final canto. The game was then tied at 62-all with just over three minutes to go in the fourth, which is when the Saudis went on a decisive 9-1 run to close out the contest.

It was the third straight loss for Bahrain in the competition. They had opened with resounding victories over the UAE and Oman, but could not keep up their winning ways. Nonetheless, they managed to make it through to the final four. Al Anzoor top scored for Bahrain against Saudi with 17 points, while Abbas Fadhel Khalaf was their only other player in double figures with 11. Albasri finished with nine while Mahdi Al Almusalli chipped in with seven.

Abdulrahman Khalid Bin Mahfuth paced Saudi with 22 points. In other games yesterday, Qatar routed Oman 82-32 to secure first place while Kuwait edged past the UAE 39-37 in a thrilling, low-scoring affair. The regional tournament is also being played to determine the GBA teams that will compete in the FIBA U18 Asian Championship 2022, which will take place in Tehran from August 21 to 28. Only the top two teams from the GBA will book their tickets to the continental show case.

Dhabar to vie for steeplechase gold in junior athletics worlds