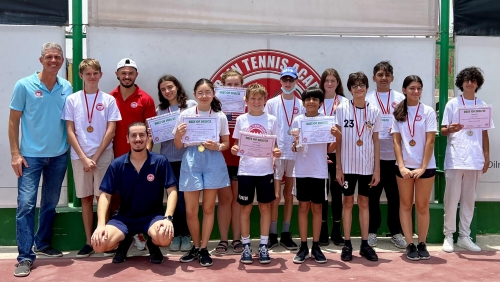 Bahrain Tennis Academy (BTA) held its 18th Annual Junior Awards Ceremony for 11-and-over players at the Dilmun Club in Saar. The ceremony, was held to honour the most outstanding players of the 2021/22 season.

14 awards were presented across two sections: ‘Best of 2021/22’ (12 categories) and ‘Player of the Year’ (two age categories). Some of the categories included Best Backhand, Best Serve and Best Sportsmanship.

Four players were short-listed for each award and then the winner chosen based on the criteria for each category while also taking into account each player’s level and experience in the game. Winners of the prestigious Player of the Year awards were Ziyad Hasan (12-and-under) and Madison Haywood (13-and-over).

The awards were presented by BTA Director, Dan Barrie, who said, “After the interruptions we have had over the past seasons, we have been so pleased to see all the kids come back as eager as ever to train and improve alongside their peers.” For more information on BTA’s junior programs WhatsApp message the director at 39697114.