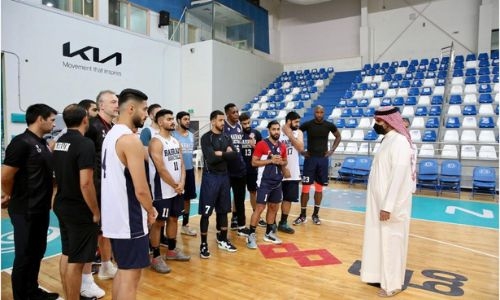 The Bahrainis are set to play against Syria on Friday and then with Kazakhstan on Monday next week in their World Cup qualifiers. The team have arrived in the Syrian city of Aleppo where they will hold their game at Al Hamadaniyeh Stadium.

They then travel to Astana for their last contest at Republican Velodrome Saryarka. Prior to their departure, the nationals were visited during a local training session by Bahrain Olympic Committee vice-president His Highness Shaikh Isa bin Ali bin Khalifa Al Khalifa, BBA president Captain Waleed Al Alawi, and the Supreme Council for Youth and Sports president’s advisor Mohammed Al Ajmi. Bahrain head into their last two World Cup qualification contests having lost all four of their Group D fixtures so far.

They have bowed to Iran twice before losing once each, both at home, to the Syrians and Kazakhs. Upon reaching Aleppo, Bahrain national team manager Nooh Najaf was met with Syrian basketball officials. The team have also begun their final preparations for the qualifiers with their practices supervised by Lithuanian head coach Mindaugas Lukosius. Meanwhile, following their World Cup qualifiers, the Bahrainis will next month be going up against the continent’s best in the FIBA Asia Cup 2022 between July 12 and 24 in Indonesia.

The squad list is expected to change for the competition, according to a BBA official. Bahrain are in Group B for the tournament’s preliminary round along with continental powerhouses China, South Korea and Chinese-Taipei. There are 16 countries in all participating in this year’s FIBA Asia Cup, which was postponed from its original slot last year due to the COVID-19 pandemic.

The other groups in the preliminary round feature Saudi Arabia, Jordan, defending champions Australia and hosts Indonesia in Group A; Iran, Japan, Kazakhstsan and Syria in Group C; and India, Lebanon, the Philippines and New Zealand in Group D. This year’s event marks the 30th edition of the continent’s leading basketball tournament. Bahrain have appeared in the Cup, originally known as the Asian Basketball Championship, eight times in the past.