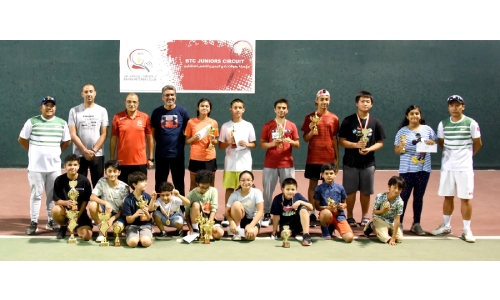 India’s Atif Saquib and Pakistan’s Zayn Siddiqi won their respective singles titles on the concluding day of the Bahrain Tennis Club (BTC) Juniors Circuit Tennis Tournament, which was played at the BTC premises in Juffair. Atif claimed the under-12 boys’ singles title while Siddiqi clinched the under-18 open singles crown.

Atif won his trophy after defeating countryman Rion Jay 6-4, 6-0 in their division’s final. Atif had to scrap for every opportunity in order to break Rion’s steady returns in the first set. He was able to solve his opponent’s style en route to claiming the win in straight sets.

Later, Siddiqi needed nearly two-and-a-half hours to win his title after going toe to toe with India’s Ahmed Riyaan in their final. Siddiqi kept his nerves and was able to close the match with a 7-6 (7-4), 4-6, 10-6 score line.

The two finals marked the end of the championship, which was intended to hone the juniors’ skills in a competitive environment. Following the action, BTC’s sports committee head Salah Al Najjar and BTC executive director Hamdi Abduljawad presented the cups and prizes to all the tournament’s winners in an awarding ceremony.