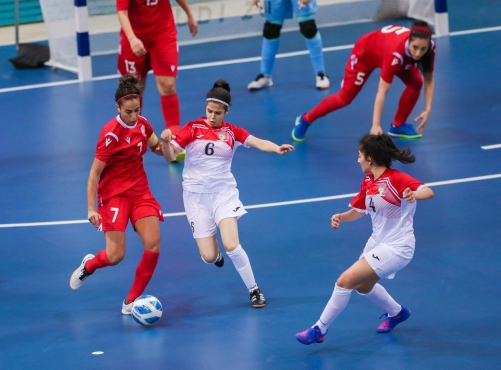 Hessa Al Isa scored a hat-trick and Shaikha Alanood bint Hamad Al Khalifa had a brace, while Manar Yaqoob netted the Bahrainis’ other goal. The Bahrainis scored three goals apiece on either side of half-time.

The nationals are in Group B of the competition’s preliminary round. They next face off with Iraq tomorrow at 6pm in their concluding divisional fixture. The UAE were also supposed to compete in the tournament in the same group, but have withdrawn.

Group A consists of Kuwait, Oman and Saudi Arabia. The top two teams at the end of a single round-robin face off in the semi-finals on Tuesday next week, with the Group A winners taking on the Group B runners-up and vice-versa.

The gold and bronze medal games are then scheduled for next Friday. In last night’s rousing victory, Bahrain opened the scoring with four-and-a-half minutes left in the opening period with Shaikha Alanood’s first. Skipper Yasmeen Tobellah stole possession and was able to find Shaikha Alanood on the outside edge of the penalty area.

Shaikha Alanood turned and hit a low shot from an acute angle into the bottom-right corner of the net past Palestine goalkeeper Cyntia Botto. With under two minutes to go before the interval, Shaikha Alanood doubled the Bahrainis’ advantage.

She hit an effort that took a slight deflection off Palestine’s Ayah Khattab. Then, moments later, with 40 seconds left, Bahrain made it 3-0. A Yasmeen attempt from distance was blocked by Botto, but she could not fully control the shot. The loose ball rolled in front of goal and Hessa pounced, needing only to tap the ball into an empty net.

That gave the Bahrainis their commanding lead at the break. In the second period, with 11 minutes to play, Manar got in on the scoring with a powerful rocket from near the half-court line that was deflected by Khattab before flying into the net.

The nationals were not finished and they continued to press. In the very next minute, a superb cross-court pass from Yasmeen on the right wing to a charging Hessa on the left gave her a one-on-one with the Palestinian goalkeeper.

Hessa made no mistake with her attempt, masterfully flicking the ball over Botto to make it 5-0. Hessa then completed her hattrick and applied the nail in the coffin with three minutes and 40 seconds to play. She scored with a short stab in the face of goal following a fine assist from Yasmeen.