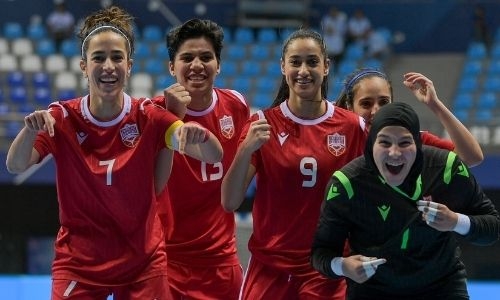 Bahrain barged into the gold medal game of the women’s futsal tournament at the third GCC Games yesterday. The Bahrainis secured their place in the final following a hard-earned, come-from-behind 5-3 victory over the UAE in their last-four clash. Star striker Hessa Alisa scored a brace, while Shaikha Alanood Al Khalifa and skipper Yasmeen Tobellah also fired in for Bahrain. The victors’ fifth goal was supplied by the UAE’s Nouf Aladwan, who sent the ball into her own net. Shaikha Alanood’s goal, her first of the tournament, gave the Bahrainis the lead for good after falling behind twice early in the con- test. The Bahrainis are next set to face off with Kuwait for the gold medals. The Kuwaitis claimed their place in the title contest with a penalty-shootout triumph over Saudi Arabia in last night’s other semi-final. The gold medal match is scheduled to be held tomorrow.

It will be played at 7.30pm, Bahrain time, and it will be preceded by the bronze medal affair between the UAE and Saudi at 5pm. The Emiratis were the first to light up the scoreboard through Aladwan’s opener in the fourth minute of action. But the Bahrainis replied three minutes later with Hessa’s first strike. Afra Almheiri was then on target for the UAE in the 14th minute to give them a 2-1 advantage, but Yasmeen equalised once more the very next minute. Hessa put Bahrain ahead with her second goal in the 15th minute, but the Emiratis were able to level the proceedings two minutes before the half through Afra. Shaikha Alanood then provided her heroics just two minutes after the re-start, and then Nouf had her own goal a minute before full time.

The win maintained the Bahraini women’s undefeated record in the tournament. They are coached by Brazilian Marcelino Gomes Da Silva, who is also at the helm of the men’s national futsal team. Exciting clash Meanwhile, Bahrain’s senior men’s national basketball team set up an exciting clash with the UAE in the semi-finals of their tournament at the third GCC Games in Kuwait. The Bahrainis defeated Saudi Arabia 63-51 yesterday to wrap up their prelim- i - nary round campaign and set up their final four clash. The other semi-final will be between Saudi and hosts Kuwait. Both games are scheduled to be held tomorrow, with today being a rest day. The winners move on to the gold medal game on Tuesday, with the losers facing off in the bronze medal match. Bahrain enjoyed a strong start against the Saudis last night as they went ahead 18-6 at the end of the first quarter.

Saudi were able to cut the deficit to 22-27 heading into the interval, but the Bahrainis stayed in control with a strong third quarter, which ended in their favour at 45-33. The two teams then matched each other point for point in the final canto, earning the nationals their second successive win in the competition. Four players scored in double-figures in Bahrain’s balanced attack. Muzamil Ameer led the way with 15 points, while Wayne Chism added 13 to go with 13 rebounds. Mohammed Ameer chipped in with 11 markers and Mustafa Hussain had 10 for the victors. Bahrain’s semi-final assignmen t with the UAE is ar e - match of their first game of the tournament’s prelimi - nary round, which the national s lost.