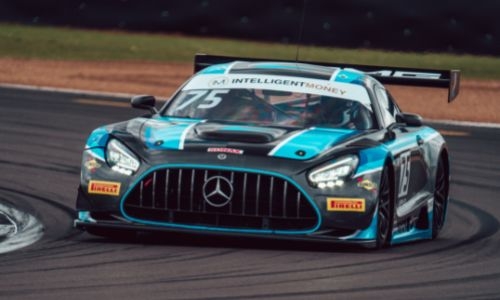 Bahraini-British motor racing team 2 Seas Motorsport had some mixed results in the Silverstone 500—the third round of this year’s Intelligent Money British GT Championship. After a strong qualifying that saw both 2 Seas cars earn places in the grid’s top 10 of 35, fortunes switched for the race.

Cottingham held position from the start, but then received heavy contact as he defended his place. And as he attempted to recover, he was pushed into the path of further traffic, receiving another heavy impact and race-ending damage to the rear suspension.

Meanwhile, the #75 2 Seas car of 2018 series champions Flick Haigh and Jonny Adam moved up the order to finish the threehour event in sixth overall after starting ninth. Making her first series race start for four years, Flick got away cleanly and avoided various contact over the opening laps to make important early progress. From there, she continued to run cleanly and consistently, moving the blue and black #75 up the order over the opening hour.

With several front-runners opting to pit early, the 2 Seas Motorsport pitcrew chose to extend the opening stint and maximise the opportunity to run in clean air. At the hour mark, Flick finally entered the pitlane from third place and handed over to Adam.

Another long opening stint for the four-time British GT champion moved them up the order once again, with pitstops set to play a role in the closing stages. Adam’s outright pace was among the quickest on track and, as he approached the end of his opening run, he inherited the race lead before pitting with just over 30 minutes remaining.

Two short sprints then followed as Flick completed another strong stint, again running in clean air and firmly near the front of the field. Completing the mandatory three pitstops, she handed back to Adam for one last splash-and-dash stop, and he set about closing the gap to the leading pack who had already completed their final s tops.

Over the closing laps, Adam made significant gains over the cars ahead, bringing the deficit down consistently with each lap. As the clock reached 180 minutes, the #75 Mercedes-AMG GT3 crossed the line in sixth overall, and fourth in the ProAm class. The season now heads to Donington Park for the first of two visits this year, over the weekend of May 28 and 29.