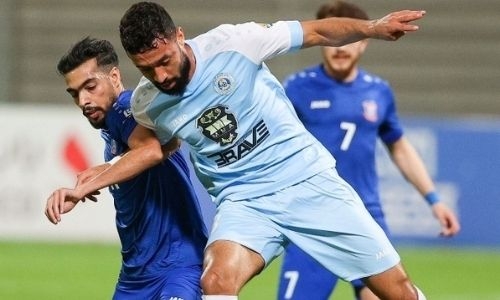 The title race in the 2021/2022 Nasser bin Hamad Bahrain Premier Football League will go down to the final matchday after defending champions and table-toppers Riffa played to a goalless draw with chief rivals Manama last night in both teams’ penultimate game. League top scorer Mahdi Abduljabbar missed a penalty in the second half that would have won the game for Manama and put them level on the standings with one match left to play for both sides.

Instead, the share of the points allowed Riffa to maintain their three-point advantage over Manama heading into the league’s final week. Riffa went to 39 points following their sixth draw while Manama went to 36 markers, also with their sixth stalemate of the season.

Riffa are scheduled to face AFC Cup champions Muharraq in their concluding fixture, while Manama take on current third-placers Al Khaldiya. Riffa need just one point from that match to seal the title for the second successive season, while Manama need Riffa to lose while also win by four goals or more to steal away the crown.

Riffa currently hold a threegoal advantage in goal difference on the league table. In last night’s draw, Manama were gifted a golden opportunity to go ahead after Mohammad Al Hallaq was taken down in the penalty box by Riffa’s Hamad Al Shamsan in the 50th minute. Al Shamsan was given a yellow card for his foul. Abduljabbar stepped up to take the spot kick and all were expecting him to add to his league-leading 15-goal tally.

But the crafty striker misfired and his shot flew well over the crossbar. Neither team could break the deadlock the rest of the way, sending the thrilling title race to one final play date. Meanwhile, in yesterday’s other game, Khaldiya drew with East Riffa 1-1 in a battle between two top-five clubs. Abdulla Mubarak opened the scoring for East Riffa in the 40th minute with a wonderful strike from an acute angle on the right of the box.

His goal came off a wellplaced assist by teammate Saeed Al Murjan, and Mubarak made no mistake with his powerful effort, which he sent to the roof of the net. That sent his team to the locker rooms with the slim one-goal lead, but Khaldiya struck back after the interval. Ismaeel Abdullatif provided the equaliser 11 minutes after the re-start.