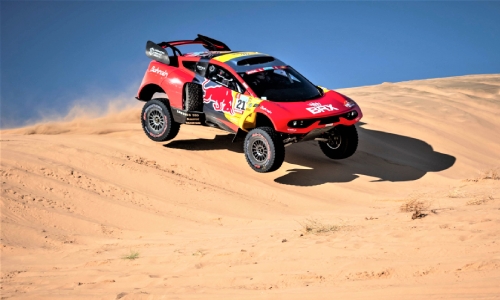 Loeb impresses for BRX as Dakar begins in earnest

Sebastien Loeb shrugged off a double puncture to give the Bahrain Raid Xtreme team an impressive second place as the 2022 Dakar Rally began in earnest yesterday.

Looping around Hail in the north of Saudi Arabia, the 333- km stage was the real start of the 44th Dakar, with Loeb and co-driver Fabian Lurquin producing an impressive display in their Prodrive Hunter.

The UAE’s Sheikh Khalid Al Qassimi was an early casualty on the day as his Abu Dhabi Racing Peugeot 3008 DKR was halted by a broken gearbox at first passage control.

The stage featured a huge variety of terrain. It had high-speed sections, complicated navigation and rocks, and even nine-times WRC Champion Loeb suffered two punctures before recovering with a burst of sheer pace towards the end of the test.

Orlando Terranova/Dani Oliveras finished 11th while Nani Roma/Alex Haro finished 18th following some navigational difficulties after being at the forefront of the stage, making the critical choices of direction that so many behind can follow.

It reduces carbon emissions by 80% compared to petrol. Loeb finished the stage to say: “It was a long and difficult stage, but the strength of the car allowed us to keep a good rhythm and pace.

The navigation was really tricky at some points while in some places it was quite rough. We had two punctures, but overall, a good day and we are happy to have this result.”

Terranova said: “The stage was very fast with some straight tracks but between 120 and 140km we had two punctures. However, the first one took time because we couldn’t shut the door over the damaged tyre and then after that we saw that the navigation was tricky.”

Gus Beteli, BRX team principal, said: “We are happy with the cars as it’s still the first big stage. However, there is a long way to go with another 12 days of this rally ahead of us.”