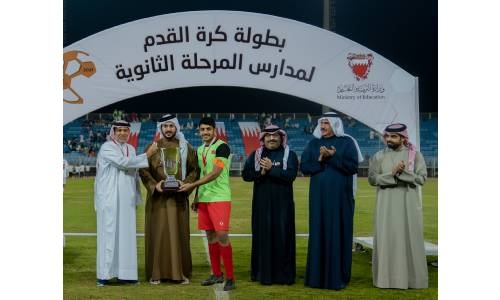 HH Shaikh Nasser bin Hamad Al Khalifa, Representative of HM the King for Humanitarian Works and Youth Affairs have deputised HH Shaikh Khalid bin Hamad Al Khalifa, First Deputy President of the Supreme Council for Youth and Sports, President of the General Sports Authority, and President of Bahrain Olympic Committee to attend the final game of the championship which was organised by the Ministry of Education in cooperation with the Supreme Council for Youth and Sports, the General Sports Authority and the Bahrain Football Association.

The match was won by Al Taawon School with a score of 5-4 in the penalty shoot-out after the game finished in a 2-2 draw.

At the end of the game, HH Shaikh Khalid crowned Al Taawon Secondary School as the winner of the championship.

Commenting on this event, HH Shaikh Khalid bin Hamad Al Khalifa underlined the interest in developing school sport which came as part of the outcomes of the “Estijabah” programme initiative which was launched by HH Shaikh Nasser bin Hamad Al Khalifa to promote the sports system in the Kingdom, considering school sport is a solid component of this system and a cornerstone to elevate the sports community to reach the highest levels and achieve further successes.