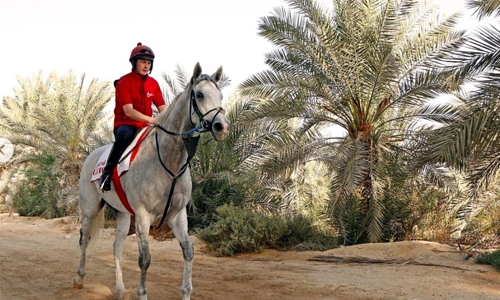 The third edition of the £500,000 Group Three Bahrain International Trophy takes place today at Rashid Equestrian and Horseracing Club (REHC) in Sakhir and the participants are looking forward to a highly competitive race ahead.

The day’s feature event is scheduled for 4 pm and it will be held over 2,000 metres/10 furlongs on turf.

It has attracted a world-class field of 14 horses along with some of the biggest owners, trainers and jockeys in the sport.

Fawzi Nass, the trainer of last year’s Bahrain International Trophy winner Simsir, is back and looking to triumph once more.

He says they are ready for the challenge ahead.

“[Emperor of the Sun] is a galloping type,” Nass was quoted as saying about the four-year-old horse, who has only recently travelled to Bahrain from O’Donoghue Racing in Ireland.

“Lee rode him for the first time [a few days ago], and his feedback was good.

The horse feels and moves well.”

Victorious-Nass-Newman were the triumvirate behind Simsir’s success last year, and they are hoping that the same winning formula translates to even more success in 2021.

“[Lee] is going to hope to do the same as last year,” Nass said.

“He knows the tactics.

He’s a master at it.” As for Naamoos and Qaader, two horses formerly trained by Johnston Racing in England and both of whom arrived in Bahrain around six weeks ago, Nass said:

“Naamoos has shown a lot of promise this season with Mark Johnston.

He had enough time to adapt to the track and the weather and everything that comes with it.

I am happy with him.

“Qaader is a nice horse.

He’s not a big horse but he’s light on his feet and has a big stride in action.

The preparations are good and he’s adapted to the track.”

Naamoos jockey David Egan from Ireland, who has raced several times at REHC and taken several victories here, is hopeful of making the most of his experience in Bahrain and his strong relationship with Victorious owner His Highness Shaikh Nasser bin Hamad Al Khalifa.

“To win the Bahrain international Trophy would be fantastic and a real honour to bring it home for HH Shaikh Nasser and Fawzi Nass who have been very good to me,” Egan was quoted as saying.

Egan and the other competitors are upbeat about competing amongst a very high-quality group.

“To have such a high class, high standard of race is fantastic and hopefully, with a few more years to come, it can only improve—Group Two and maybe sometime in the future we’ll have an international Group One here in Bahrain, which is the plan and it will be fantastic,” he said.

“This race seems to be getting more competitive each year.

It’s going to be a tough task, over 10 furlongs here.”

Matthew Ennis, travelling head lad for trainer David O’Meara who will be contending with eight-year-old Lord Glitters and jockey Jason Watson, said of his contender:

“We’re back in the sun, back abroad.

He’s a very enthusiastic horse day to day, loves his work.” Lord Glitters competed in last year’s event and finished an impressive fifth, but hopes to go one step further this time around.

“Hopefully he’ll run a good race like he did last year,” said Ennis.

“Hopefully all goes to plan this year.”

There will be another six local races on the cards tomorrow at REHC, with the day’s action scheduled to begin from 1.10 pm.

The six other races will have on offer cups from the event’s sponsors Batelco, Bapco and Bahrain EDB. 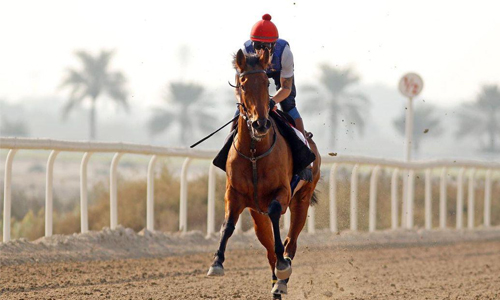 Bahrain International Trophy to be shown live in 130 countries