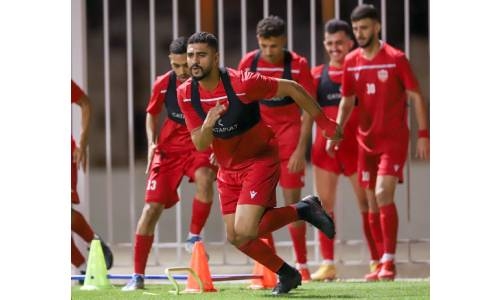 The final 23-man squad has been named for Bahrain’s Olympic football team which will be competing in the AFC U23 Asian Cup 2022 Qualifiers.

The Kingdom will host the Group C matches in qualification starting tomorrow.

The teams participating include Iraq, Afghanistan, the Maldives and the host Bahrainis.

Following a rescheduling of the matches, Bahrain will play their first game tomorrow against Afghanistan.

They then return to the pitch on Thursday for their game against the Maldives, before playing their final qualifier on Sunday next week against Iraq.

The Bahrainis have been training for the qualifying competition over the past several months under the supervision of Karimi.

They also had a warm-up campaign in their participation in the West Asian Football Federation U23 Championship earlier this month, which unfortunately did not go as planned with two big losses against Syria and Saudi Arabia.

The Bahrainis will be looking to bounce back and earn a berth in the AFC U23 Asian Cup 2022. Following the recent withdrawal of a couple of teams, 40 nations will be participating divided into 11 groups, with 15 spots available at next year’s AFC U23 Asian Cup.

The 11 group winners and four best second-placed teams seal their qualification to the finals. Uzbekistan has already confirmed their place as hosts, which will be the first time the tournament will be staged in the Asian Football Confederation’s (AFC) Central Zone.