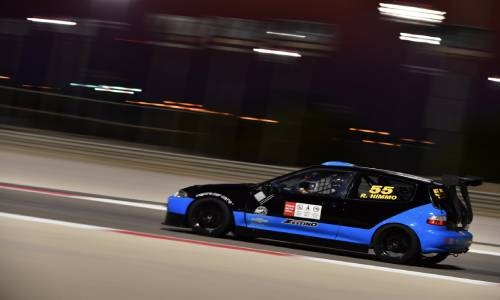 Raed Himmo powered to a fantastic double in the opening round of the 2021/2022 BIC 2,000cc Challenge, held over the weekend as part of National Race Day at Bahrain International Circuit, “The Home of Motorsport in the Middle East”.

The Sakhir desert facility provided a stunning backdrop for Himmo’s brilliant start to the new season, with both his race wins coming under BIC’s bright floodlights. The series’ 2012/2013 title winner was behind the wheel of his black/blue Honda Civic, as he overcame a stiff challenge from defending champion Raed Raffii in each of the meeting’s two 12-lap sprints.

Andreas Buelow started off the day by topping the timesheet in Practice with a best lap of one minute 20.655 seconds around BIC’s 2.550-kilometre Inner Track, driving his white Honda Civic.

Ali Al Mansoori in a blue/grey Honda Civic then pipped Himmo to pole position by 0.224 seconds in Qualifying with a fastest lap of 1:16.849. But in Race One, Himmo was quick to take over as leader, charging to the front of the pack around the very first corner and then doing masterfully to hold on to the advantage until the chequered flag. Himmo finished the race in a winning time of 18:15.408.

Raffii was engaged in a tight battle for the runner-up spot with Al Mansoori until the latter retired from the race on lap seven. Raffii was 1.532s behind Himmo, while Buelow claimed third place overall 3.854s back. Buelow was also the race’s winner in the Novice class.

In Race Two, Al Alawi was in pole and Buelow beside him following the reverse grid rule. It wasn’t long, however, until Himmo was able to capture the lead, which he did early in the second lap. He eventually led the same trio onto the overall podium, clinching first place in 15:54.395.

He was 4.954s ahead of Raffii and 8.789s in front of Buelow. Al Alawi was originally third, but he, along with Himmo and Raffii, was given a five-second penalty for a start offence, promoting Buelow.

Following each race, a podium ceremony was held attended by officials from BIC, the Bahrain Motor Federation and the Circuit Racing Club.