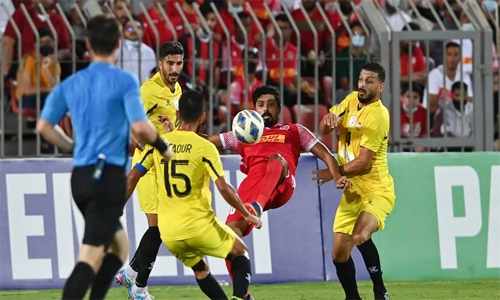 The Bahraini representatives scored all three of their goals in the second half of the semi-final contest, which was a one-off affair played at Shaikh Ali bin Mohammed Al Khalifa Stadium in Arad. Nigerian Moses Atede, Ahmed Al Sherooqi and Abdulla Al Hayki were all on target for Muharraq.

The Kingdom’s side now marches through to the regional finale, where they will take on the winner of the other West Asia Zonal Semi-final between Kuwait Club of Kuwait and Al-Salt of Jordan. That game is scheduled to be held today in Kuwait with a 7.30 pm kick-off, Bahrain time. The zonal final is scheduled for October 20, and the winner of that game will play for the title in the AFC Cup 2021 Final, currently set for November 5. Atede opened the scoring for Muharraq in the 67th minute with a stunning goal.

Influential midfielder Abdulwahab Al Malood supplied a brilliant pass that released Atede and put him in a one-on-one with Ahed goalkeeper Mostafa Matar, who came charging out of the penalty box in an effort to make a clearance.

But Atede beat him to the ball and the Muharraq forward was able to flick it above Matar’s head, allowing it to crawl into the goal unopposed. The home team then made it 2-0 in the 87th minute and it was Al Malood who once again supplied the assist.

He found enough space between two Ahed defenders to find Al Sherooqi in a dangerous position in the area, and Al Sherooqi made no mistake with his low effort, slotting the ball past Matar. Al Hayki then applied the final nail in the coffin in the second minute of stoppage time.

Substitute Sanad Saleh made an impressive solo charge into the box before passing on to Al Hayki just metres from goal. His initial effort was stopped by Matar but Al Hayki was able to get to the rebound and tap the ball in. Muharraq is now two wins away from claiming the AFC Cup title for the second time in the competition’s history. The only time they won it was in 2008.