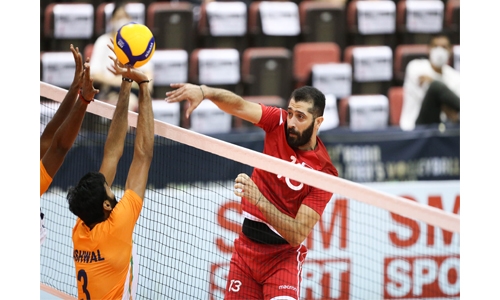 The result put the Bahrainis in 10th place overall among the 16 participating teams, while India claimed ninth. It was the fourth time in 10 appearances that Bahrain was classified 10th in the continental tournament.

In Bahrain’s loss yesterday, the Indians did well to take the two-set advantage and appeared to be cruising to the convincing victory. But the nationals would not go down easily and fought back valiantly behind the strong play of Mohammed Anan and Ali Alsairafi, who led their rally with six points apiece in the third set.

The Bahrainis took the next two sets to set up the decisive tie-break, but could not complete their comeback in the end with the tightly contested finish.

It was a hotly contested affair throughout and the match lasted over two hours.

Anan was the top man with 22 points, including 19 on the attack to go with two service aces.

Nasser Anan chipped in with 19, with 18 on spikes, while Mohammed Yaqoob finished with 12, nine of which came on attack.

Rai Ashwal paced India in the win with 24 points.

The Bahrainis are coached by Brazilian Marco Antonio Queiroga. Their other players in the championship were Ali Khairalla, Hussain Sultan, skipper Mahmood Hasan, Mahmood Alafyah, and Mahmood Abdulhussain.