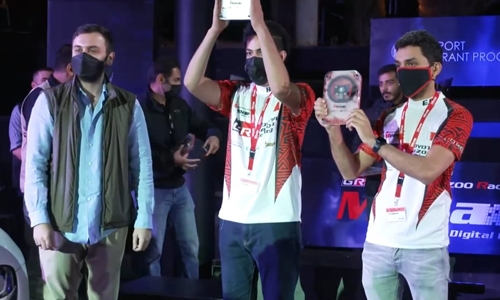 Bahrain Esport racing standouts Ebrahim Abbas Al Mubarak and Hassan Khalil had impressive results in the Toyota Gazoo Racing MENA Digital Cup 2021, which was held in Amman, Jordan, last weekend. The pair achieved ninth and 10th place, respectively, on the final overall ranking of competitors from across the region. There were a total of 22 racers battling it out in three challenges, and both Al Mubarak and Khalil displayed a high level of competitiveness.
They each excelled in the Country Challenge and Elimination Challenge on day one, which set the stage for the main event the following day, the MENA Cup Showdown. The racers were divided into two groups for the Showdown’s semi-final stage. Al Mubarak was in Group B, where he qualified second and finished third in the race, while Khalil was in Group A where he qualified third and finished fifth. Their semi-final classifications earned them a place in the Showdown’s final, which comprised only the top six drivers from each group for a field of 12.

Al Mubarak put himself in a potential podium position by qualifying third for the race, and he crossed the finish line in sixth place but was later demoted to ninth following a penalty issued to him by the race stewards. As for Khalil, he finished 10th in the finale, which is the same position he started from.
Speaking after the event, Al Mubarak and Khalil described their participation in this first-of-its-kind championship as distinct and successful, where they were able to gain a great deal of experience especially amongst an elite-level field of Esport racers from across the Middle East and North Africa.
The Bahraini pair also enjoyed experiencing a number of modern simulators and advanced technologies, and said that they are looking forward to future similar competitions where they hope to raise the flag of the Kingdom of Bahrain high, especially since Bahrain sparked the meteoric rise of motorsport in the Middle East and North Africa and as it is considered to be the home of motor racing in the region.

Al Mubarak and Khalil expressed their deep thanks and gratitude to the Bahrain Motor Federation (BMF), headed by BMF President His Excellency Shaikh Abdulla bin Isa Al Khalifa, the board of directors, management, and all of the BMF team.
They added that their participation was an opportunity to further develop their skills and capabilities in Esport racing, and are confident of giving their best in upcoming competitions in honour of the Kingdom.
The Toyota Gazoo Racing MENA Digital Cup 2021 featured contestants from 11 countries, including Lebanon, the UAE, Qatar, Kuwait, Saudi Arabia, Palestine, Cyprus, Oman, Mauritania, Jordan and Bahrain, with two drivers from each country taking part.
The event was held under the FIA Sport Grant Programme and Jordan Motorsport, with the support of Toyota Motorsport, represented by Toyota Gazoo Racing. Lebanese Sami Jo Abi Nakhle won the title, while Izz Bustami from Jordan was the runner-up and Khalid Al Maraghi from Qatar third.