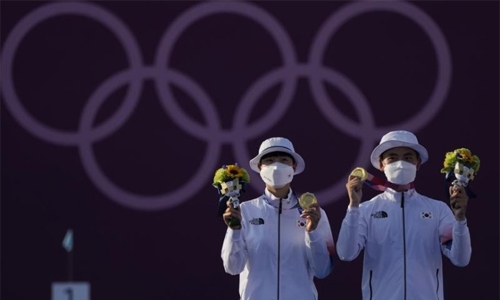 A San and teenager Kim Je Deok paired up to lead South Korea to a gold medal in the Olympic debut of archery’s mixed team event at the Tokyo Games.

On a sizzling Saturday at the Yumenoshima Park Archery Field, they held off Gabriela Schloesser and Steve Wijler of the Netherlands by a tally of 5-3 to bring home yet another archery gold for South Korea. The country has now captured 14 of 17 gold medals in archery team competitions since the current format was introduced to the Olympics in 1988, The Associated Press (AP) reported.

What’s more, it was the 24th Olympic gold medal for South Korea’s archery program, matching short track speed skating for most by the country in a particular sport.

Alejandra Valencia and Luis Alvarez combined for Mexico and knocked off Yasemin Anagoz and Mete Gazoz of Turkey to earn the bronze medal.

The American team of Mackenzie Brown and Brady Ellison was eliminated in the first round by Indonesia.

The future of archery is certainly bright for South Korea, with An just 20 and Kim only 17. They posted the highest qualifying scores in the ranking round the day before, with An setting an Olympic record.

An sealed the win Saturday with a score of “9” on her final arrow.

The matches in the mixed team event are decided by a set system. Each set consists of four arrows and the team with the best score earns two points (they split a point on ties). The first team to achieve five set points wins the match.

South Korea beat Bangladesh, India and Mexico on its way to the final. The Netherlands advanced by getting by Italy, France and Turkey.