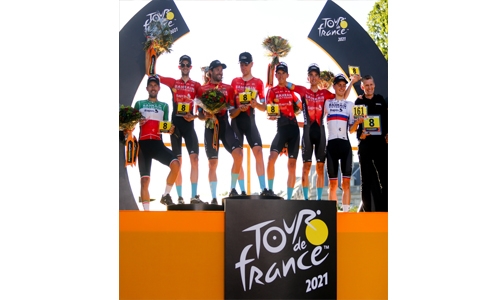 Team Bahrain Victorious were yesterday crowned winners of the Team category as the world-renowned Tour de France 2021 wrapped up with the 21st and final stage ending in Paris.

The classification for the best team is an award that is calculated by taking into account the first three riders across the line from each squad and adding their times together.

He had 88 points, finishing only behind title winner Tadej Pogacar who had 107 points. Elsewhere, Bahrain Victorious’ Sonny Colbrelli took third place in the Points rankings with 227. Teammate Matej Mohoric was not far behind in sixth with 163 points.

The Team Bahrain Victorious members received their awards in the final awarding ceremony held along the world-famous Champs-Elysees.

The 22-year-old Slovenian, who won the Tour on his debut last year, hammered his rivals in the Alps with a long-range attack on stage eight, reminiscent of the event in the 1980s, and stayed in control for the rest of the race.

He beat Denmark’s Jonas Vingegaard by a massive five minutes 20 seconds as Ecuador’s Richard Carapaz took third place, 7:03 off the pace as his Ineos Grenadiers team failed to spark once again after last year’s failure.

Pogacar finished Sunday’s 21st and final stage safe in the bunch as Belgian Wout van Aert prevailed in the sprint to beat compatriot Jasper Philipsen and Briton Mark Cavendish who were second and third, respectively. Pogacar watched from the inside of the bunch, raising his arms as he crossed the line.