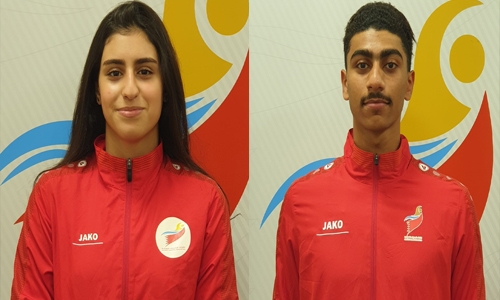 Bahrainis Abdulla Isa and Noor Yusuf are set to compete in the sport of swimming at the Tokyo Olympic Games, the Bahrain Swimming Association (BSA) announced yesterday. Their participation comes upon the invitation of the International Swimming Federation (FINA) as wild cards. Abdulla will take part in the Men’s 100m Butterfly while Noor will contest the Women’s 50m Freestyle. Abdulla and Noor were both invited following their impressive performances at the 18th FINA World Championships 2019 in Guangju, South Korea, and the seventh FINA World Junior Swimming Championships 2019 in Budapest, Hungary.

At the world, Abdulla was able to set a national record in the 100m butterfly of 58.44 seconds. The now-18-year-old hopes to improve that mark in Tokyo. Meanwhile, Noor, currently aged 15, set her personal bests in both the 50m freestyle and 50m backstrokes of 29.42s and 32.98s, respectively, at the world juniors. This year’s Games will mark the sixth straight Olympics where Bahraini swimmers are competing, and seventh overall.

At the previous Olympiad in Rio de Janeiro in 2016, the Kingdom was represented in the pool by Farhan Saleh and Fatema Almahmeed. In 2012 in London, Bahrainis Khalid Alibaba and Sara Al Flaij took part; in 2008 in Beijing, Bahrain was represented by Omar Jasim and Sameera Al Bitar; in 2004 in Athens, Hesham Shehab and Sameera participated; and in 2000 in Sydney Dawood Jassim and Fatema Hameed Gerashi were the Kingdom’s Olympians. Bahrain’s first appearance in swimming was in 1984 in Los Angeles, when Hamad Bader and Esa Fadel competed.

The confirmation of Abdulla and Noor finalises Bahrain’s team for the Tokyo Olympics. The national delegation is set to feature a total of 68 individuals, including athletes and officials. Bahrain will be competing in five sports, namely athletics, handball, boxing, shooting and swimming. The Tokyo Games are scheduled to take place between July 23 and August 8. More than 200 nations are expected to take part, vying for medals in over 300 events across more than 30 sports.