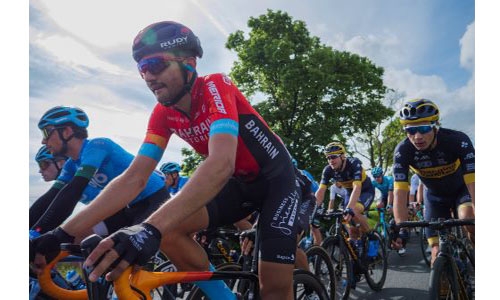 Team Bahrain Victorious’ success at the Tour de Hongrie continued in the third of five stages, as Phil Bauhaus sprinted to yet another victory – his second of the event after also winning stage one. The leg started in the Hungarian area of Veszprém, with riders taking on 142 kilometres to the finish in Tata.

An early breakaway of five riders formed after 20 kilometres, but the gap was controlled with them not getting more than four minutes.

The peloton worked to close the gap on the break with good work from Team Bahrain Victorious and the Bahraini rider Ahmed Madan doing turns on the front of the group.

The lead-out train put Bauhaus in a great position to win and he beat his competition to the line. A strong show from Fred Wright also saw him cross the line in third to complete the podium. With the win, Bauhaus went back into both the overall and points jersey.

He was quoted as saying after the stage: “We had a really good tactic and were able to stay calm in the last corners. With 1km to go, Haussler was amazingly strong.

“There was one guy from Jumbo [team] between us, and I let Fred go, but I could go and get the win.”

Madan, who is the first-ever Bahraini to be competing on a professional world tour, has been delighted with his first race with the team. “Stage 3 of Tour de Hongrie done,” he was quoted as saying. “It was a shorter stage with sunny weather.

Haussler helped me a lot today on the stage with positioning and getting more confident with the group. “The more I race now, the more I have confidence in myself, allowing me to do more work for the team in the front to help chase the breakaway and we won today!

” The Tour de Hongrie is a five-leg road race that started in the town of Siofok and ends in Budapest. Over the five days, the riders will take on a total of 792 kilometres, ascending over 7,954 metres.

It is a part of the 2021 UCI Europe Tour, and Team Bahrain Victorious are one of eight UCI WorldTeams taking part.