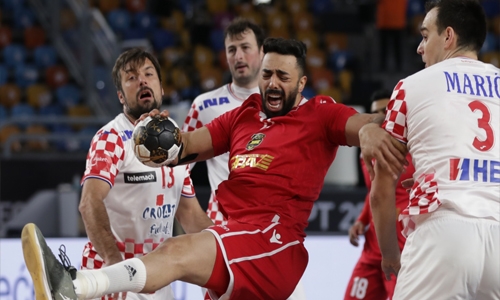 Bahrain has named a 27-player roster for the senior men’s national team that will begin training locally today in preparation for this summer’s Tokyo Olympic Games. The squad was announced by the Bahrain Handball Association yesterday, and the first gathering will be supervised by national team assistant coach Essam Abdulla until the arrival of Icelandic tactician Aron Kristjansson, who is expected to join at the end of the month.

The team is set to be spearheaded by Bahrain’s overseas-based professional players, including skipper Hussain Al Sayyad and Mohammed Habib from Saudi Arabian club Al Wehda, Ali Mirza from Sharjah in the UAE, and Jassim Al Salatna from Emirati club Al Maliha.

They include Qassim Al Shuwaikh, Qassim Qambar, Ahmed Jassim and Ali Abdulqader. The rest of the team list features Hassan Al Samaheeji, Mahmood Hussain, Mohammed Mirza, Hussain Mahfoodh and Hasan Madan from Al Ahli; Ahmed Jalal and Mujtaba Al Zaimoor from Al Shabab; Mohammed Hameed and Ali Mahmood from Al Ettifaq; Hassan Mirza from Tadhamon and Hisham Ahmed Isa from Al Dair. All players called up are expected to be a part of today’s sessions, with the exception of the eight from Najma and four from Barbar.

The two teams had just battled it out in the final of the Khalid bin Hamad Handball Cup on Thursday night and will be granted some time to rest before joining training on Tuesday next week. Bahrain’s national handball team are making a historic debut appearance in Tokyo, as the first-ever athletes from the Kingdom to have qualified for a team sport at the Olympics. For the men’s tournament’s preliminary stage, Bahrain will be playing against Egypt, Portugal, hosts Japan, world championship silver-medallists Sweden, and reigning world and Olympic champions Denmark.

Group A consists of Argentina, Spain, Germany, France, Norway and Brazil. The men’s handball tournament at the Tokyo Olympics is scheduled to take place between July 24 and August 8. The Bahrainis open their tournament campaign against Sweden on day one. They then take on Portugal on July 26 and then face Denmark two days later.

Bahrain then squares off with fellow-Asian side Japan on July 30, before completing their preliminaries schedule against Egypt on August 1. The Bahrainis booked their berth at the Tokyo Games after winning the Men’s Asian Qualification Tournament held in Doha in October of 2019, defeating South Korea in the final.