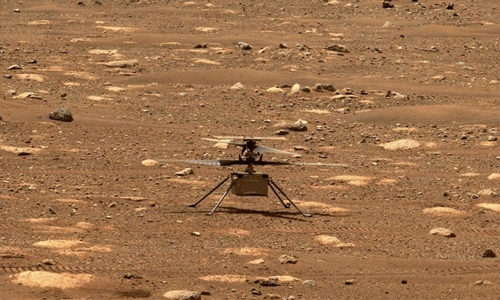 NASA released the first audio recording from one of its Ingenuity helicopter's flights on Mars on Friday.

The Perseverance rover, which landed on Mars in February with the mini-helicopter on board, recorded the audio with a microphone on Ingenuity's fourth flight at the end of April, the US space agency said.

It is both the first audio recording of a flight on Mars and the first made by one spacecraft of a separate spacecraft on another planet, dpa reported.

The helicopter cannot be heard particularly well, as Perseverance took the recording from around 80 metres away and the thin atmosphere on Mars and the wind muffle and obscure the flight noise.

But the little that is audible is a "very good surprise," planetary scientist David Mimoun said.

"We had carried out tests and simulations that told us the microphone would barely pick up the sounds of the helicopter, as the Mars atmosphere damps the sound propagation strongly.

"We have been lucky to register the helicopter at such a distance.

"This recording will be a gold mine for our understanding of the Martian atmosphere."

The Perseverance rover, which weighs around 1,000 kilograms and is the size of a small car, travelled 472 million kilometres over 203 days of flight to get to the Red Planet.

It landed in a dried lake spanning 45 kilometres called the Jezero Crater, which it is set to inspect in the coming two years.

The construction and development of the rover took eight years and cost around 2.5 billion dollars.

Perseverance's mission is to search for traces of microbial life on Mars and examine the climate and geology of the planet.