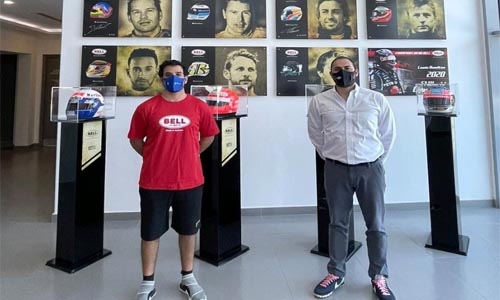 Bahraini racing team 2 Seas Motorsport have announced that they have entered into a partnership with Bell Racing. The relationship will see the world-renowned helmet supplier working closely with 2 Seas Motorsport as the team enters a second season of GT3 competition, competing on the world stage.

2 Seas Motorsport co-owner His Highness Shaikh Isa bin Abdulla Al Khalifa commented: “Some of the most iconic motorsport images through history feature the world’s greatest drivers wearing a Bell Racing Helmet, and the brand has played a huge role in the safety of the sport.

“It is a real honour to have such a prestigious brand headquartered in Bahrain, and I am extremely pleased that 2 Seas Motorsport will continue to strengthen the Bahraini relationship by partnering with Bell Racing Helmets and I am proud to be wearing the same brand of the helmet as names such as Senna, Prost and Schumacher.”

They have already scored a strong result this season and helped strengthen Bahrain’s motorsport credentials with victory at the Gulf 12 Hours Bahrain, and it is really exciting for us to have our helmets being raced at the highest levels by a Bahraini driver and team.” The relationship between Bell Racing Helmets and 2 Seas Motorsport is further strengthened with the company headquarters and global manufacturing operation adjacent to Bahrain International Circuit in Sakhir.

The partnership will see the new-for-2021 2 Seas Motorsport Mercedes GT3s wearing Bell Racing Helmets branding, while HH Shaikh Isa will race exclusively with the latest HP7 Evo III carbon helmet which has been developed through close collaboration with Formula 1 drivers and teams.

Kadimagomaev looks to bounce back, challenges Babayev for BRAVE CF 51